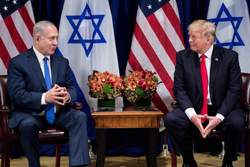 Fifty former European foreign ministers and leaders have strongly lambasted as akin to “apartheid’ the so-called “deal of the century” plan recently proposed by US President Donald Trump as a solution to longstanding Israeli-Palestinian conflict.

RNA - In a strong-worded letter published by the Guardian on Thursday, the European figures – including former premiers and senior ministers – urged action to oppose the plan, which is titled “Peace to Prosperity” and commonly known as Trump’s “deal of the century.”

“The plan contradicts internationally agreed parameters for the Middle East peace process, relevant UN resolutions, including Security Council resolution 2334, and the most fundamental principles of international law,” the letter said, stressing that the details of the scheme was similar to “apartheid.”

Trump infuriated Palestinians last month, when he unveiled his much-delayed “deal of the century” during an event at the White House alongside Israeli prime minister Benjamin Netanyahu.

Palestinian groups have unanimously rejected Trump’s one-sided plan, which largely meets Israel’s demands in the decades-old conflict with the Palestinians while envisioning a Palestinian state with limited control over its own security and borders.

The so-called “peace” plan enshrines Jerusalem al-Quds as “Israel’s undivided capital” and allows the regime to annex settlements in the occupied West Bank and the Jordan Valley. The plan also denies the right of return for Palestinian refugees to their homeland, among other controversial terms.

In conclusion, the signatories urged Europe to reject the US plan to pave the way for negotiations and take urgent and effective steps to eliminate the threat of annexation of Palestinian territories by the Israeli regime.

They also said that considering the urgency of the situation they called to action from “the international community, particularly the European Union”, in a bid to “preserve the dignity and rights of the Palestinians.”

The signatories of the joint letter are as follows:

Trump’s plan has triggered waves of protest rallies both across the Palestinian occupied territories and around the globe.

The Palestinian Authority, led by President Mahmoud Abbas, wants the West Bank as part of a future independent Palestinians state, with East Jerusalem al-Quds as its capital. The continued expansion of Israeli settlements is one of the major obstacles to the establishment of peace in the Middle East.

Abbas has already severed ties between the Palestinian Authority and the Israeli regime as well as the US in reaction to Trump’s highly-provocative scheme.

Apart from the Palestinian leaders, many other international blocs and organizations, including the European Union, the Organization of Islamic Cooperation (OIC), and the African Union, have rejected Trump’s plan.