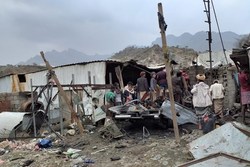 At least 30 civilians have been killed and many others injured in fresh air raids conducted by Saudi warplanes on Yemen's Northern Jawf Province, Yemeni media reported.

The strikes, it added, targeted people who had gathered near the wreckage of a Saudi jet that had been shot down by Yemeni forces on Friday evening.

Yemen's Health Ministry said aid workers could not reach the site of the attack due to continuous flights by Saudi warplanes over the area.

The al-Masirah TV cited difficulty in confirming the number of victims as body parts were scattered over the targeted area.

The Spokesman for Yemeni Armed Forces said on Friday that they had downed a tornado warplane belonging to "enemy forces" in Jawf Province.

Brigadier General Yahya Saree said the warplane was brought down by an advanced air-to-ground missile.

The spokesman for Yemen's Houthi Ansarullah movement on Saturday condemned the Saudi massacre in Jawf, saying, "As usual, when the most brutal US-Saudi aggression receives painful strikes in the military confrontation fields, it replies with great folly by targeting civilians.

According to Fars News Agency, Saudi Arabia and a coalition of its vassal states launched the war on Yemen in March 2015 in an attempt to reinstall a Riyadh-backed former regime and eliminate the popular Houthis who have been defending the impoverished country against the offensive.

The Saudi military aggression, coupled with a naval blockade, has killed and injured hundreds of thousands of people, and plunged Yemen into what the UN says the world's worst humanitarian crisis.

The UN says an estimated 24 million people – close to 80 per cent of the population – need assistance and protection in Yemen.