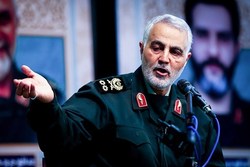 RNA - The paper reported on Thursday that General Soleimani had been arranging talks in Saudi Arabia and United Arab Emirates in order to de-escalate tensions with Tehran.

The Times wrote that the talks happened after Saudi Arabia and the UAE, which are central to the Trump administration's so-called regional alliance seeking to pressure Iran, began to question the efficiency of Washington's anti-Iran campaign.

According to the report, one such meeting took place last September in Abu Dhabi, the capital of the United Arab Emirates where a plane carrying "senior Iranian officials" landed for talks.

News of the meeting, which reached Washington only after it was notified by reports from American spy agencies, "set off alarms inside the White House", according to the report.

The report added that a similar mediation attempt, also arranged by Gen. Soleimani, was underway between Tehran and Riyadh using Iraqi and Pakistani intermediaries.

The report wrote that the developments had greatly concerned Israel, which had been trying to push the Trump administration to exert more pressure on Tehran.

According to the Times, US Secretary of State Mike Pompeo met Mossad chief Yossi Cohen on October during a trip to Israel where he was briefed on Iran's attempted de-escalation talks with Saudi Arabia and the UAE.

Cohen warned Pompeo that Tehran was effectively on the verge of achieving its "primary goal" of breaking up the so-called "anti-Iran" alliance.

A few months later in early January, General Soleimani was assassinated by Washington’s order while on a formal visit to Baghdad.

According to former Iraqi prime minister Adel Abdul-Mahdi, General Soleimani was due to formally meet the Iraqi premier during the trip and was carrying Tehran's response to a message from Riyadh regarding the de-escalation talks.

Following the attack, the Trump Administration claimed that the assassination had taken place after a reported rocket attack on a US base in Iraq killed a "US civilian contractor" and that Gen. Soleimani was an "imminent threat" to US citizens.

Many US political figures have rejected the claims and have questioned why the Trump administration has failed to provide any evidence backing its actions.

The New York Times' Thursday report, however, reveals that entirely different considerations, such as Israel's push to undermine Iran's attempts at peace with its regional neighbors, were behind the assassination.

According to the report, the assassination marks yet another miscalculation by the Trump administration which has failed to bend Iran through its "maximum pressure" campaign.

Following its unilateral withdrawal from the 2015 Iran nuclear deal in 2018, the US imposed unilateral sanctions against Tehran in a bid to goad Tehran to accept new terms dictated by Washington.

The Times, however, reported that a recent analysis conducted by the Central Intelligence Agency  (CIA) shows that the sanctions have had little effect in fulfilling Washington's goals.

The US has also sought to pressure Iran militarily by deploying troops to the region and creating a regional anti-Iran alliance in the region as part of if its anti-Iran campaign.

Washington called for the formation of a naval coalition in the region following a string of suspicious attacks on oil tankers in the Persian Gulf.

Iran has vehemently denied the accusations, saying the incidents appear to be false flag operations meant to frame the Islamic Republic and push US interests.

Citing instances such as the major Yemeni attack on Saudi oil facilities last September and Iran's downing of a US Global Hawk spy craft in June, the New York Times report said stepped-up US military presence also failed to achieve its objectives.

Witnessing the Trump administration's faltering policy in the Middle East, Saudi Arabia and the UAE were convinced to open direct talks with Tehran, the report noted.

Twitter explodes with outrage after Trump likens himself to a king