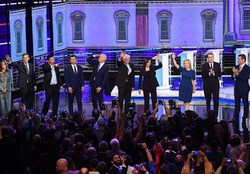 Some of the candidates took to Twitter to express their displeasure with the Senate’s decision.

Sen. Amy Klobuchar (D-Minn.), who voted Trump guilty of both charges, said it was a “somber day for our country”.

“History will remember that the majority in this body did not seek out the evidence and instead decided that the President’s actions did not even require a second look,” she wrote on Twitter.

"It is a somber day for our country. As Senators, we are representatives of the American people and it's our duty to protect and defend the Constitution. The President leveraged the power of his office for personal gain and the choice before us is clear. No one is above the law," she added.

Sen. Elizabeth Warren (D-Mass.), who also voted to convict Trump, said the Republicans voted to “protect” the president, even though he "exploits our government for his personal gain”.

But the senator turned her attention to the future.

“Now more than ever, we must choose courage and hope over fear,” she posted, adding, “Now is our moment to fight back. We have defeated corruption before, and we will do it again."

Tom Steyer, billionaire philanthropist, said Trump’s acquittal signals that the Republican senators will not “magically negotiate in good faith and ‘meet in the middle’”.

Trump's GOP primary challenger Bill Weld, former governor of Massachusetts, stated that the acquittal was “to no one’s surprise”, but commended Romney for voting to convict Trump, saying the Utah senator showed “the courage we should expect from our US Senators”.

Former New York City Mayor Michael Bloomberg called the Senate trial a “charade” and the vote a “disgrace”, before encouraging people to focus on the 2020 election.

“We must do in November what all but one of the Senate Republicans didn't have the courage to do: vote to remove a lawless, reckless president and turn the page on this dark chapter in the life of our country,” he wrote.

Former South Bend, Ind., Mayor Pete Buttigieg – who received the most number of delegates in Iowa's first-in-the-nation caucus Monday with 92 percent of the precincts reporting – also set his sights on the future election, saying the American people “will be the jury tomorrow”.

"The Senate was the jury today, but we will be the jury tomorrow. The last word on Donald Trump and Trumpism will come through the American people—at ballot boxes across the country," he stated.

US is committed to press freedoms: Pompeo

Americans dissatisfied with the state of the US: Poll