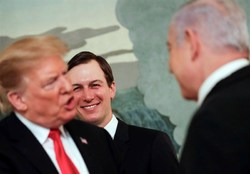 US President Donald Trump has repeated his hugely-controversial endorsement of occupied Jerusalem al-Quds as Israel’s “undivided capital” as he outlined his administration’s self-styled plan for the Palestinian-Israeli conflict, which Palestinians have already dismissed.

RNA - Defying international outcry, Trump on Tuesday announced the general provisions of the plan that he has dubbed “the deal of century” at the White House with Israeli Prime Minister Benjamin Netanyahu at his side.

The entire scheme, he added, has been penned in 80 pages, 50 of which, according to Reuters, encompass political courses of action, while the rest details an economic proposal that Washington announced last July.

Trump endorsed his contentious recognition in December 2017 of the al-Quds as Israel’s “capital,” a move he took in the face of historic Palestinian demands that the city’s eastern part serve as the capital of their future state. He said the plan envisages the city as the regime’s “undivided capital.”

“Under this vision, Jerusalem will remain Israel’s undivided — very important — undivided capital,” he said of the plan.

For years, the US had avoided declaring Jerusalem al-Quds the capital of Israel in the absence of a deal, as Palestinians also want the holy city as their capital.

In a hazy afterthought, though, Trump added that Palestinians too could have a capital in East Jerusalem.

The economic portion promises $50 billion in monetary allocations to Palestinians, Jordan, and Egypt. Palestinians have denounced the latter part of the US scheme as a means of bribing them into selling their rights.

The Palestinian sides — who had already rejected any such scheme in unison —were conspicuously absent from the ceremony, which experts view as largely ceremonial and an attempt to score a political win while each of the leaders on stage faces domestic crises.

1. Im starting to look at this document. it might have sounded nice but it’s all about the details and many of the ideas are absolute non-starters. As I find key things I will post them. https://t.co/uxJeL7uiUt

More than 600,000 Israelis live in over 230 settlements built since the 1967 Israeli occupation of the Palestinian territory of the West Bank.

Trump said under his plan, no one would be “uprooted,” apparently recognizing the settlements built on occupied Palestinian land. Senior administration officials, briefing Reuters on the details of the plan, likewise said it features the recognition of the structures.

The US president, however, alleged that Israel would be freezing its settlement activities for four years “while Palestinian statehood is negotiated,” the agency added. Tel Aviv has never fully committed to such freezes, causing any negotiation process to break down.

Trump said his proposal encompasses a map outlining “two states,” and claimed that the Palestinian state would be “double the size” of the land that Palestinians currently control.

“My vision provides a win-win opportunity for both sides. A realistic two-state solution that resolves the risk of Palestinian statehood to Israel’s security.”

Both Netanyahu and his main rival, former general Benny Gantz had met with Trump in advance of the White House event, giving all-out support for the supposed deal, including the contours of the purported map.

Reuters, however, cited a US official as saying that, “In doing the map, it’s incredibly difficult to try to create contiguity for a Palestinian state based on what’s happened over the past 25 years,” referring to the popping up of settlements across the occupied territory over the course.

Another official said the plan refrains from moving the settlers as it is “based on a principle that people should not have to move to accomplish peace.”

The US chief executive, meanwhile, verbalized a withering attack on Hamas, the resistance movement that has freed the Gaza Strip from Israeli control in 2005, and has been defending it against almost-daily Israeli incursions.

Netanyahu said Trump’s plan recognized Israeli sovereignty over other large areas of Palestinian territory, including Jordan Valley, and that the deal would seek to fully disarm Hamas.

“Given all that you have already done for Israel, I'm not surprised. You have been the greatest friend that Israel has ever had in the White House," he told Trump.

Hamas official Sami Abu Zuhri reacted to the event, calling Trump's statements on his plan “aggressive” and his proposals for al-Quds “nonsense.”

“Trump’s statement…will spark a lot of anger,” he said, adding that al-Quds “will always be a land for the Palestinians.”

As Trump began his speech, Palestinian leaders from rival Fatah and Hamas movements held an emergency meeting to discuss the scheme.

Ismail Haniyeh, the head of Hamas’ Political Bureau, and Mahmoud Abbas, president of the Palestinian Authority, which is based in the city of Ramallah in the West Bank, held a rare phone conversation prior to the White House event.