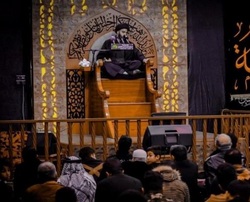 On the martyrdom of the daughter of the Holy Prophet Muhammad, Fatimah al-Zahra, mourning ceremonies were organized in Islamic centres around the world.

RNA – On the martyrdom of the daughter of the Holy Prophet Muhammad, Fatimah al-Zahra, mourning ceremonies were organized in Islamic centres around the world.

Speakers delivered lectures recalling the calamities that befell Fatimah al-Zahra in addition to elegies, according to International Media Centre.

The Islamic Centre in Koumassi, Ivory Coast, witnessed a commemoration for the martyrdom of the Prophet’s daughter.

In the holy city of Qom, Iran, a mourning ceremony was held at the famous Jamkaran Mosque.

Hundreds gathered in the Imam Hussain Centre in the Swedish city of Malmö to remember the tragedy of Fatimah.

A two-day event was held at the al-Kawthar Institute in The Hague, the Netherlands.

All around Iraq, mourning ceremonies were held in Holy Shrines, Islamic centres and houses of Ahl al-Bayt followers.