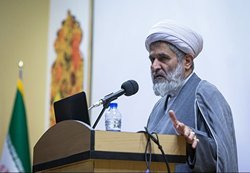 Hujjat al-Islam Taeb stated that if we depart from the main course of the Islamic Revolution and compromise with the enemies, we will certainly be doomed to defeat.

RNA – Speaking on the second day of the Basij commanders’ general assembly, Hujjat al-Islam Hoseyn Taeb, the head of the intelligence service of the Islamic Revolutionary Guard Corps (IRGC), said that if the believers take step toward assisting God Almighty, God will promise them victory and noted, “Given the current situation of our country, resistance is the most important key to victory over the arrogant powers of the world and if we depart from the main course of the Islamic Revolution and compromise with the enemies, we will surely be doomed to defeat.”

His Eminence continued, “If we want to play an important role in the victory of our country over the arrogant powers of the world, we must act in regard to God’s promises and stand against the enemies of God and this requires our country to move on the path of progress, growth and strength day by day.”

Hujjat al-Islam Taeb emphasized that the United States and the Zionist regime had plotted the assassination of Martyr Haj Qasem Soleymani in an attempt to strengthen their survival at the regional level and said, “The enemies of the Islamic Revolution are now doing all they can to survive through soft war tactics, semi-hard and hard warfare but they must know that the martyrdom of Haj Qasem Soleymani isn’t a factor in the achievement of their objectives but rather the objectives of this great martyr will continue.”

He said that the path of Donald Trump is a path which accelerates the United States toward its collapse and noted, “The Americans are doing whatever they can to survive, but Trump, as the President of the United States, is taking risks with all of his might, but this same terrifying and terroristic element will be the cause of the fall of the Great Satan.”

At in conclusion, Hujjat al-Islam Taeb referred to the large gatherings of Iraqi people protesting against the military presence of the United States in Iraq and stated, “In the past few days we have witnessed massive protests against American military positions in Iraq but the enemies of the Islamic Revolution were trying to censor these events in order to neutralize them.”

Tags: Taeb USA Iraq Trump Iran
Short Link rasanews.ir/201sii
Share
0
Please type in your comments in English.
The comments that contain insults or libel to individuals, ethnicities, or contradictions with the laws of the country and religious teachings will not be disclosed