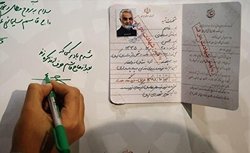 A booklet on the identity cards of the martyrs was unveiled, including that of Haj Qasem Soleymani, in the presence of the great martyrs’ families.

RNA – According to Rasa News Agency, a booklet on the identity cards of the martyrs was unveiled at the closing ceremony of the Pigeons of the Holy Shrines Festival, including that of Haj Qasem Soleymani, in the presence of these great martyrs’ families.

It is worth mentioning that this booklet on the identity cards of the martyrs contains a selection of ethical, personal and social characteristics, as well as an agreement of loyalty to the paths and aspirations of the martyrs.

General Ganjali said, “Today, thanks to the blood of martyrs, thousands of soldiers have camped in Qunaytrah – very close to Israel in order destroy this triangle of gold, force and deception. The fruit of the martyrs’ blood was the enduring security that pushed the enemies back millions of kilometres and now Iran is the safest country in the region. The recapture of Syria, Iraq and the countries of the region was all due to the blood of the martyrs, who formed the rings of resistance and joined together.”