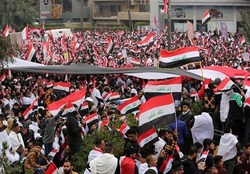 The White House has been dealt stinging blows following the massive march in Iraq against the presence of US troops in the country as well as the formation of a new government in Lebanon, says a senior official from the Lebanese resistance movement, Hezbollah.

RNA - The White House has been dealt stinging blows following the massive march in Iraq against the presence of US troops in the country as well as the formation of a new government in Lebanon, says a senior official from the Lebanese resistance movement, Hezbollah.

“The US administration was slapped in the face this week following the events in Beirut and Baghdad. The Iraqi people pressed their demand, and poured out onto the streets in a million-man demonstration to substantiate that the blood of Lieutenant General Qassem Soleimani (the commander of the Quds Force of Iran’s Islamic Revolution Guards Corps) and Abu Mahdi al-Muhandis (the deputy head of the Iraqi Popular Mobilization Units) sealed the departure of US soldiers from Iraq forever,” said Sheikh Nabil Qaouk, deputy chief of Hezbollah's executive council, at a ceremony in Wadi al-Hajir region of southern Lebanon on Sunday.

The Hezbollah official said the formation of a new Lebanese government led by Prime Minister Hassan Diab disappointed President Donald Trump of the United States, Secretary of State Mike Pompeo, Assistant Secretary of State for Near Eastern Affairs David Schenker and other US statesmen who had pinned their hopes on chaos, siege of the resistance front and subjugation of the Lebanese nation.

Qaouk highlighted that the new administration in Lebanon was on a national rescue mission of preventing economic collapse and confronting corruption.

“Hezbollah will be at the forefront of its supporters.”

Lebanon announced the formation of the new government on January 21. The country had been without an effective government since caretaker Prime Minister Saad Hariri resigned in October last year under pressure from protesters exhausted by state corruption and mismanagement.

“I've been appointed in the face of many accusations. I wanted to work, not to argue. I have abided by the law informing me to form a government. I followed the rules and regulations to form a new team of ministers,” he said, moments after the lineup was read out at the presidential palace in the capital Beirut.

"This is a government that represents the aspirations of the demonstrators who have been mobilized nationwide for more than three months."

He pledged that his government “will strive to meet their demands for an independent judiciary, for the recovery of embezzled funds, for the fight against illegal gains.”

“In this decisive moment, I salute the revolution and the uprising that pushed us towards this and Lebanon has become victorious. We will achieve social cohesion. There will be accountability,” Diab said.

“This [is a] government that does not aspire to cronyism and favors. None of the members of the government will be standing for the next elections. This government is made up of non-partisan people who are not affected by political wrangling.”