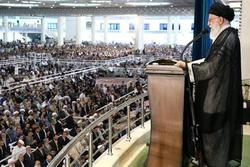 Leader of the Islamic Revolution Ayatollah Seyyed Ali Khamenei says the assassination of a top Iranian commander disgraced the US as it had to own up to the "terrorist" action and see its image dealt a blow by Iran's retaliation.

RNA - "The day the missiles of the Islamic Revolution Guards Corps crushed the US base is one of the days of God. The Guards' response was a major blow to America's fearsome superpower image," the Leader told a huge crowd in Tehran Friday.

For the first time in eight years, Ayatollah Khamenei led the Friday prayers in Tehran’s Imam Khomeini Grand Mosque attended by a huge number of worshipers. It came after Iran pounded two US bases in Iraq with missiles in retaliation for the assassination of General Qassem Soleimani.

The Leader described the past two weeks as extraordinary marked by both bitter and sweet adventures and events containing lessons for the Iranian people.

"The day of God means seeing the hand of God in the events - the day when tens of millions in Iran and hundreds of thousands in Iraq and some other countries came to the streets to honor the blood of the commander of the Quds Force," he said.

"The day IRGC missiles pounded the American base is another day of God. We saw these two days of God before our eyes. The days are a turning point which make history. They are not ordinary days," he said.

"That a nation summons such a power and mental countenance to slap an arrogant and bullying force of the world in such a fashion is a sign that the hand of the divine power" is involved,  Ayatollah Khamenei added.

The Leader said the recent events are about to leave an everlasting impact on the morale and disposition of the nations, where the Iranian people are seen as a "patient, resistant and very grateful nation".

He also touched on the "bitter" tragedy of the loss of lives in the accidental downing of a Ukrainian airliner outside Tehran, saying necessary measures must be taken in order to avoid a repetition of the incident.

“There are ambiguities. We thank the IRGC commanders who provided explanations, but the incident must be followed up, and similar incidents must be seriously prevented.”

Ayatollah Khamenei said, “As much as we were saddened and our hearts were broken by the plane crash, our enemy was made happy, assuming that it has found a pretext to question the IRGC, the armed forces, and the establishment of the Islamic Republic of Iran.”

The enemy's goal, he said, was to overshadow “that great incident” (the funerals held for General Soleimani and the IRGC’s missile attacks on the US base), but “they were wrong.”

The Leader also expressed sympathy with the families of those who lost their lives in the crash.

“We share their grief, and thank the parents and bereaved families who stood against the enemy’s plot and temptation and acted against what the enemy wanted, even though their hearts were full of pain and sorrow,” he said.

“The mother of one of these dear ones in this plane wrote to me and said ‘we are standing by the Islamic Republic and your motivations’. This needs courage, insight, and awareness,” he added.

The Leader also hit out at British, German and French leaders who admitted this week to have launched under pressure by US President Donald Trump a process that could lead to European sanctions being reimposed on Iran.

“The recent moves made by the evil government of the UK, the French government, and Germany were aimed at overshadowing the recent developments in the country. They threatened Iran with taking the nuclear issue to the Security Council once again, to which fortunately Iranian officials strongly responded,” he said.

“These are the same three countries that helped Saddam Hussein as much as they could during the imposed war. The German government provided chemical weapons and equipment for Saddam Hussein to target our cities and war fronts. The impacts of those attacks are still evident in the bodies of our veterans,” Ayatollah Khamenei said.

The French government provided former Iraqi dictator Saddam Hussein with Super Étendard strike fighter aircraft, which were used to target Iranian oil tankers during the imposed of the 1980s, the Leader said.

"This is their record. The UK government has been wholeheartedly at the service of Iran’s enemies and Saddam Hussein,” Ayatollah Khamenei said.

“These are their background, and they are acting in the same way today. They must be looked at in this way,” he added.

After the US withdrawal from the Joint Comprehensive Plan of Action (JCPOA), the three European governments "kept talking and making nonsense remarks", Ayatollah Khamenei said.

"From the very first day I said I don’t trust these three governments; that they would not do anything, and will serve the US. Now almost one year on, it is crystal clear that they are literally the pawns of the US.”

Ayatollah Khamenei called the three European governments "footmen in the real sense of the word".

The Leader said even when the Europeans sit for talks, their negotiation is mixed with deceit and tricks.

"They’re the same people, and are no different. They just change their clothes. They have a hand of steel hidden behind a pair of velvet gloves … They can’t be the ones we trust,” he added.

Nation must be strengthened

“Getting strong is the only way the Iranian nation has ahead of itself. We should strive to become strong. We have no problem with negotiation – of course not with the US, but with others,” he said.

The Leader said Iran is already strong, and will get even more powerful in the future.

“Power is not just military might. The country’s economy needs to be strengthened as well. Our dependence on oil must end, and the country must get rid of its dependence on oil. The scientific and technological leap must go on.”

Ayatollah Khamenei said the Iranian nation will in the not-so-distant future become so powerful that the enemies will not even dare to threaten the Islamic Republic.

In the final segment of his speech, the Leader said he would like to also "have a few words with our Arab brothers," and proceeded to continue the speech in Arabic.

The Leader described the assassination of Gen. Soleimani and Mahdi al-Muhandis - who was second-in-command of Iraq’s Popular Mobilization Units (PMU) - as "cowardly".

"The Americans, not daring to face Gen. Soleimani in the battlefield, opted to assassinate him along with those accompanying him in the airport in Baghdad," he said.

"ّOnce again, Iraqi and Iranian blood was shed and mixed together in the fields," he said, adding the assassination of Gen. Soleimani had resulted in the failure of foreign-backed plans to sow division between the two countries.

"Much money was spent and irresponsible people were used to promote malicious sentiment against the Iraqi nation in Iran and against the Iranian nation  in Iraq."

Ayatollah Khamenei also said Washington's goal in Iraq is to incite a civil war and ultimately partition the country and eradicate its resistance forces.

Foreign-backed conflict and instability in countries such as Syria and Lebanon are also part of the "enemy's sedition" which has targeted Iraq, he said.

Resisting the enemy and not fearing it, the Leader said, is "the sole path" that can lead to the liberation of these nations.