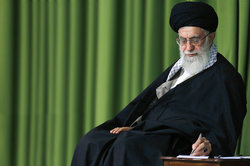 Following the results of an investigation, released by the General Staff of the Armed Forces ‎concerning the Ukrainian passenger plane crash, Imam Khamenei issued a message.‎

RNA – Following the results of the investigation, released by the General Staff of the Armed ‎Forces concerning the Ukrainian passenger plane crash, Ayatollah Sayyed Ali Khamenei – the ‎Supreme Leader of the Islamic Revolution – issued a message expressing his heartfelt ‎condolences to the honorable families of the deceased, ordering General Staff to pursue any ‎possible negligence or fault in this event, and speaking about the need to prevent the ‎possibility of such accidents happening in the future. ‎

The following is the full text of the message issued on January 11, 2020, according to ‎Khamenei.ir ‎

After having been informed of the results of the investigation conducted by the General Staff ‎of the Armed Forces pertaining to the Ukrainian passenger plane, and after it was proven ‎that human error was involved in that incident, the grief stemming from the loss of the ‎deceased from that sad incident became heavier for me.‎

First of all, I deem it necessary to express my genuine sympathy and my heartfelt ‎condolences to the esteemed families of the dear victims and to ask God, the Exalted, to ‎bestow patience, tranquillity and peace of mind on them. Secondly, I order that the General ‎Staff of the Armed Forces pursue every case of possible negligence or error that may have ‎been committed in this painful incident. Thirdly, I ask the managers and officials in charge to ‎do everything in their power to prevent such incidents from recurring in the future.‎

May God, the Almighty and the Beneficent bestow His grace and mercy on the deceased, ‎and may He shower patience and reward on their family members.‎
‎ ‎
Sayyid Ali Khamenei
January 11, 2020‎

Tags: Khamenei Plane Iran Ukraine
Short Link rasanews.ir/201sfI
Share
1
Please type in your comments in English.
The comments that contain insults or libel to individuals, ethnicities, or contradictions with the laws of the country and religious teachings will not be disclosed