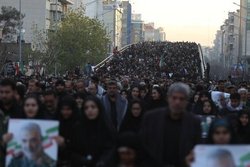 Millions of Iranians have packed the streets of Tehran to pay homage to the Middle East's most prominent anti-terror commander General Qassem Soleimani who was assassinated on US President Donald Trump's order Friday.

RNA - A huge sea of mourners, streaming from all the adjoining streets, descended on the iconic Engelab (Revolution) Square in central Tehran early Monday morning.

They carried portraits of the national hero whose assassination in a US airstrike at Baghdad airport has generated an outpouring of anger and patriotism across Iran and elsewhere.

A correspondent for the Islamic Republic of Iran Broadcasting (IRIB) said he has not seen such a crowd in 20 years in Tehran, where important occasions usually draw people in millions.

General Soleimani's daughter, Zeinab, addressed the crowd, saying "the name Haj Qassem Soleimani is now shaking the nest of Zionism, Takfirism, and the order of hegemony."

"America and Zionism should know that my father's martyrdom has awakened more human instincts on the resistance front. It will make life a nightmare for them and shatter their spider houses," she said.

The US assassination of the top Iranian commander along with deputy head of Iraq's anti-terror Popular Mobilization Units Abu Mahdi al-Muhandis and eight others has sent shock waves across the world.

It has forged greater unity in the region against US interventionism, with insistent calls for revenge being echoed across the Muslim world.

Both Soleimani and Abu Mahdi played a key role in defeating Daesh which at its peak, threatened a complete take-over of Iraq and Syria.

Gen. Soleimani's popularity transcends boundaries, and many people across the Middle East and beyond regard him as a figurehead in defeating Daesh and other Takfiri groups.

His humble persona and devotion to the security of the regional countries and the Palestinian cause made him a darling of the masses in Iran, Iraq, Syria, Lebanon and even the Palestinian territories.

The charismatic military tactician, however, won the enmity of the US, Israel and their allies in the West and the Middle East alike, because they viewed Gen. Soleimani as a threat to their plans in a resource-rich region.

According to US reports, the Pentagon kept close tabs on the Iranian general and waited in the wings for years to eliminate him, but was always wary of the repercussions.

That was until Trump, known for his mercurial temperament and poor judgmental capabilities, ordered a fiery and fatal US drone strike early Friday on Soleimani's motorcade in Baghdad where he was on the invitation of the Iraqi government.

"To mad Trump who himself is a symbol of ignorance and a plaything of Zionism: Don't think it's all over with the martyrdom of my father!" Soleimani's daughter said.