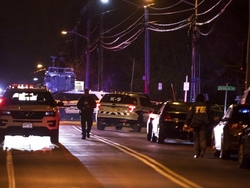 A stabbing attack Saturday night at a synagogue in a suburb North of New York City has left several people injured, according to reports.

RNA - An unidentified assailant began slashing people with a machete during a Hanukkah celebration, WCBS-TV of New York City reported.

Around midnight, authorities told reporters that the suspect's vehicle had been located and the suspect was taken into custody.

Video posted on social media from Monsey – a town of about 18,000 residents about 35 miles North of New York City – shows emergency responders rushing victims to ambulances, surrounded by the flashing red lights of numerous emergency vehicles.

In New York City, the NYPD's Counterterrorism Bureau said it was “closely monitoring" the situation, and the Anti-Defamation League of New York and New Jersey stated it was aware of the attack and was sending representatives to Monsey.

Steve Lieberman, a reporter with The Journal News in Rockland County, posted on Twitter that at least three people had been stabbed just before 10 pm and that local police were conducting a search of the area.

Messages posted later by the Orthodox Jewish Public Affairs Council of the Hudson Valley said that five people had been stabbed, including one victim who was struck six times, and that two of the victims were in critical condition. That message added that a suspect was seen leaving in a gray Nissan Sentra vehicle.

Police in Clarkstown, N.Y., also were reporting that five people had been stabbed, WCBS reported.

Letitia James, the state attorney general of New York, condemned the attack in a message posted on Twitter.

"I am deeply disturbed by the situation unfolding in Monsey, New York tonight," James wrote, adding, "There is zero tolerance for acts of hate of any kind and we will continue to monitor this horrifc situation."

"I stand with the Jewish community tonight and every night," she said.

"I am horrified by the stabbing of multiple people at a synagogue in Rockland County tonight," Cuomo wrote, adding, "We have zero tolerance for anti-Semitism in NY and we will hold the attacker accountable to the fullest extent of the law.

"I am disgusted to learn of the attack on three mmebers of our Jewish community in Brooklyn on Friday--the 6th anti-Semitic incident in NYC just this week," Cuomo wrote.

"The cowards responsible are trying to spread fear, but they will always fail. NY stands united against anti-Semitism and hate," he added.

"Horrific," de Blasio wrote, adding, "So many Jewish families in our city have close ties to Monsey. We cannot overstate the fear people are feeling right now."

"I've spoken to longtime friends who, for the first time in their lives, are fearful to show outward signs of their Jewish faith," he said.

Also earlier Saturday, US Rep. Lee Zeldin, R-N.Y., wrote on Twitter that "feckless leadership" in New York City was partly to blame for the wave of anti-Semitism there.

"The violent anti-Semitic attacks in NYC are being caused by raw hate, feckless leadership, a culture of acceptance, education and promotion of anti-Semitism, and lowering quality of life," Zeldin, from the city's Long Island suburbs, wrote, adding, "De Blasio and ALL elected and community leaders need to step up to confront and crush this threat."

The Republican Jewish Coalition also condemned the Monsey attack --- as well as the recent series of incidents in New York City.

"The political leadersip in New York isn't doing nearly enough to protect its Jewish citizens," the RJC wrote on Twitter, saying, "This has become a daily occurence in NY. These attacks might not be a convenient talking point for those on the left, but they still need to speak out."

How Trump's impeachment trial would differ from a criminal one

Trump impeachment trial in Senate stuck in limbo over rules

Families sue US firms for paying ‘protection money’ to Taliban

Trump continues to attack Democratic lawmakers over his impeachment

Trump Is Isolating the US and Here Is How

2019 Was Year of Most US Mass Murders Ever