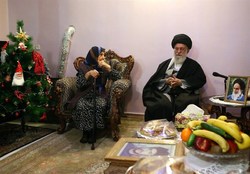 In a message released on Christmas Eve, the Supreme Leader of the Islamic Revolution ‎called for adherence to the teachings of Jesus Christ (pbuh), which requires righteousness ‎and abhorrence of anti-righteous powers.‎

RNA – In a message released on Christmas Eve, the Supreme Leader of the Islamic ‎Revolution, Ayatollah Sayyed Ali Khamenei, called for adherence to the teachings of Jesus ‎Christ (pbuh), which requires righteousness and abhorrence of anti-righteous powers.‎
‎
“The honour Muslims attribute to Jesus Christ (pbuh) is no less than his position and merit in ‎the eyes of the Christian believers in Christianity,” a post on Ayatollah Khamenei’s official ‎Twitter account read.‎
‎
“Today, many who claim to follow Jesus Christ take a different path than that of him. The ‎guidance of Jesus, the son of Mary (peace be upon our Prophet and her) is guidance ‎towards worshiping God and confronting the Pharaohs and tyrants,” it added.‎
‎
“Following Jesus Christ requires adherence to righteousness and abhorrence of anti-righteous ‎powers, and it is hoped that Christians and Muslims in every part of the world will adhere to ‎this great lesson from Jesus (pbuh) in their lives and deeds.” ‎

Christmas or Christmas Day is an annual commemoration of the birth of Jesus Christ, ‎celebrated generally on December 25 as a religious and cultural holiday by millions of people ‎around the world.‎