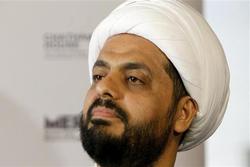 Hujjat al-Islam al-Khazali, the leader of Asa’ib Ahl al-Haqq movement, says Israeli and American spy ‎services are behind violent attacks in Iraq, and they include attacks on protesters and even the US embassy ‎in Baghdad.‎

‎“The US seeks to tarnish our image by accusing us of complicity in killing protesters. How on earth can we ‎kill our own people while we have lost our lives in the fight against Daesh because of them,” he asked.‎

Rather, Hujjat al-Islam al-Khazali added, it is the groups affiliated with the US that set fire to "our bases and ‎murdered our forces, but we did not take revenge, because those acts were aimed at moving the country ‎toward a civil war and tarnishing the image of the Popular Mobilization Forces.”‎

‎“We have information that indicates the US is seeking to create chaos in Iraq through its intelligence ‎apparatus and saboteurs inside the country and using its embassy,” he warned.‎

Hujjat al-Islam al-Khazali said the US embassy and its State Department are using their dominance over ‎social media and the potential of the US-based TV channel Alhurra to provoke riots in Iraq.‎

According to Press TV, he also warned against an Israeli plot to convince Washington to move Iraq toward destruction as part of its ‎political project.‎

‎“Even some attacks on the US embassy in Iraq have been carried out with the Israeli support,” Hujjat al-‎Islam al-Khazali said.‎

‎“Some of these attacks are orchestrated by the Israeli intelligence agencies, but another part is carried out ‎by a group that seeks to protest the US’ violation of red lines in Iraq.”‎

Why does US insist on taking Abdul-Mahdi down?‎

Elsewhere in his remarks, Hujjat al-Islam al-Khazali slammed Washington for “crossing the red lines” by ‎interfering in the internal affairs of Iraq, saying the US has in recent months strived to force Iraqi Prime ‎Minister Adel Abdul-Mahdi into resignation.‎

‎“That’s because Abdul-Mahdi rejected a US request to enjoy half of the country’s oil reserves in return for ‎its reconstruction,” Hujjat al-Islam al-Khazali revealed.‎

‎“Trump had claimed he would seize the entire oil reserves of Iraq and use security firms to guarantee the ‎US presence in the Arab country. However, Abdul-Mahdi declined this request, and the Americans are ‎calling for his resignation after this stance, and his energy contract with China,” he added.‎

Tags: Khazali Iraq PMU
Short Link rasanews.ir/201sZ1
Share
2
Please type in your comments in English.
The comments that contain insults or libel to individuals, ethnicities, or contradictions with the laws of the country and religious teachings will not be disclosed