UAE Lobbying US Congress to Impose Sanctions on Turkey 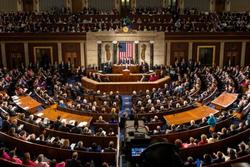 The United Arab Emirates is lobbying the US Congress to impose sanctions on Turkey, according to documents reviewed by Anadolu news agency on Monday.

RNA - An email from Charles Johnson, a partner with the UAE-hired Akin Gump Strauss Hauer & Feld LLP lobbying group, that was sent the week after the House of Representatives passed its own sanctions legislation seeks to drum up support within the vital Senate Foreign Relations Committee for the chamber to follow suit.

"Andrew & Matt - I am reaching out on behalf of our client, the Embassy of the United Arab Emirates, to underscore the UAE's condemnation of Turkish aggression in Syria and support for sanctions measures against Turkey such as the House-passed 'Protect Against Conflict by Turkey Act'," Johnson wrote in the missive obtained through the Justice Department's Foreign Agents Registration Act (FARA) website.

"I hope this information is helpful as you continue to monitor developments in Syria, and as the Senate considers potential sanctions measures," he added in the correspondence dated November 7.

The recipients are not clear, however, as their email addresses do not appear in the document. But the Senate Foreign Relations Committee's Chief Democratic Counsel is Andrew Keeler while the Republican's chief lawyer is Matthew Sullivan, according the Al-Monitor website, which first reported the lobbying effort.

Akin Gump Strauss Hauer is one of over a dozen lobbying firms the UAE has under contract, according to al-Monitor.

Neither the majority or minority on the Senate Foreign Relations Committee responded to emails and a telephone call from Anadolu Agency. The UAE's Washington embassy also did not reply to a request for comment.