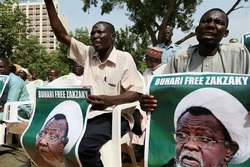 Nigerian security forces have used live fire to confront a protest marking the fourth anniversary of state-authorized massacre against the country’s Muslim community.

RNA - The forces attacking the rally in the capital Abuja on Thursday fired into the air to disperse the protesters, who were commemorating the 2015 bloodletting in the Zaria town of the northern Nigeria Kaduna State.

The demonstration had been joined by more than 100 supporters of the Islamic Movement in Nigeria (IMN).

In 2015, the army killed 350 IMN followers during a raid on the house of the movement’s leader Sheikh Ibrahim al-Zakzaky.

"We are protesting to commemorate the killing of our members in Zaria four years ago," said Muhammed Bello, a demonstrator, during the rally.

Abuja has been coming down hard on the movement ever since, including by blacklisting it as a “terrorist group” and killing hundreds in clashes with those rising in protest against the deadly violence.

The country has also kept Sheikh Zakzaky, who has been left in dire health conditions due to the 2015 attack and subsequent mistreatment, and his wife in detention since seizing them during the crackdown.

Back in August, Sheikh Zakzaky and his wife were allowed to travel to India to receive medical treatment as his condition was deteriorating. But he returned to Nigeria a few days later, citing a push by the Nigerian government to "obstruct" his treatment.

The authorities then transferred the duo to a prison, where many detainees have so far died due to lack of medical attention.

Those joining the Thursday rally asserted, though, that they would keep coming to the streets to protest the plight that has been deliberately imposed on them. "They cannot stop [us] from exercising our rights to free protest," Bello said.