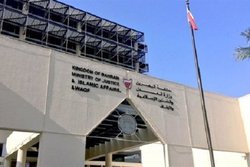 A court in Bahrain has sentenced eight anti-regime protesters to life imprisonment and handed down prison sentences to several others as the ruling Al Khalifah regime presses ahead with its heavy-handed clampdown on political dissidents and pro-democracy campaigners in the Persian Gulf kingdom.

RNA - On Wednesday, the First High Criminal Court sentenced five defendants to life in prison after finding them guilty of “possessing weapons, explosives as well as mock bombs, and helping some criminals to flee from justice …,” Arabic-language Bahrain Mirror news website reported.

Separately, seven other anti-regime protesters received 10-year prison sentence, and were ordered to pay a fine of 100,000 dinars by the same court.

It also sentenced a dissident to 15 years in prison, and handed down five-year jail terms to four others. Five defendants received four-year prison sentences as well.

Moreover, the court slapped a three-year prison sentence against a defendant, and sentenced another nine to one year in jail.

Bahrain Mirror noted that all the defendants were accused of affiliation to the February 14 Youth Coalition — an opposition protest movement named after the date of the beginning of a popular uprising against the Manama regime – and the opposition al-Wafa Islamic Movement.