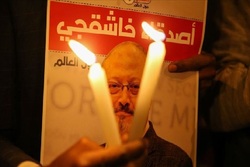 The United States on Tuesday barred from entering the country Mohammad al-Otaibi, who served as the Saudi consul general in Istanbul when Saudi Journalist Jamal Khashoggi was murdered in his consulate in 2018, the US State Department announced.

RNA - "The murder of Jamal Khashoggi was a heinous, unacceptable crime," the State Department said in a statement, adding that it continued to urge the Saudi government to conduct a "full, fair and transparent" trial to hold accountable those responsible for the journalist's death, according to Al-Jazeera.

Khashoggi was a US resident and a critic of Saudi Crown Prince Mohammad bin Salman (MbS), and his killing inside the Saudi consulate in October 2018 caused worldwide outrage.

The CIA and some Western governments have said they believe MbS ordered the killing, but Saudi officials say he had no role. Eleven Saudi suspects have been put on trial over his death in secretive proceedings in Riyadh.

US President Donald Trump has expressed doubts about the CIA assessment and argued that Washington must not risk its alliance with Riyadh, regarded as a regional counterweight to Iran.

Al-Otaibi was previously the subject of a US asset freeze for his alleged role in Khashoggi's murder.

The sanctions on al-Otaibi came as the Trump administration announced economic sanctions on individuals suspected of human rights violations in six countries and barred two individuals, including the Saudi national, from entering the country.

Tuesday's announcement was made in connection with International Human Rights Day.

The other individuals are from Burma, Pakistan, Libya, Slovakia, South Sudan, Congo and Russia.

Trump under fire for attempting to defend Saudi after deadly shooting

US: Hundreds Sleeping Outside in Frigid Times Square to Fight Homelessness

Trump trying to shield Saudis from accountability after Florida base attack

US resumes negotiations with Taliban to end Afghan war