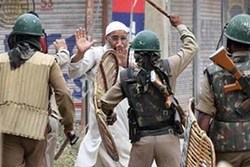 The European Union (EU)’s special envoy to India says the bloc is “concerned” about the ongoing situation in the disputed Himalayan region of Kashmir, which has been under strict security measures since early August.

RNA -“We are concerned over the situation in Kashmir... It is important to restore freedom of movement and normalcy in Kashmir,” EU Ambassador to India Ugo Astuto said on Tuesday.

On August 5, the administration of Prime Minister Narendra Modi revoked the autonomy of Kashmir. Besides severing telecom links ahead of that decision, India imposed curbs on travel and sent thousands of troops to the already heavily-militarized region, citing “security” concerns.

Some curbs have since been eased, but others have lingered.

Astuto also said that a contentious visit by about 30 far-right European lawmakers to the Muslim-majority region in October had not been “an expression of EU’s policy decision.”

The Indian government at the time said the aim of the visit was to give the lawmakers “a better understanding of the cultural and religious diversity” of the Muslim-majority region.

Elsewhere in his remarks, Astuto stressed that, “India and Pakistan should resolve issues through dialog.”

Kashmir has been a disputed territory between Pakistan and India since 1947. Both claim the territory in full but each rules only parts of it.

For decades, India has battled militancy in the portion it controls. It blames Pakistan for fueling the strife, but Pakistan denies any involvement.

Over one-quarter of Israelis living in poverty: Report