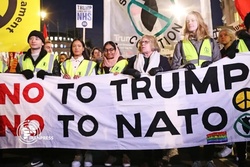 Several hundred protesters gathered in London's Trafalgar Square on Tuesday in protest against NATO and US President Donald Trump.

RNA - Holding placards reading: "Dump Trump" and "No to racism, no to Trump" protesters marched to Buckingham Palace where NATO leaders were gathering for a reception.

Trump arrived in London on Monday to attend a NATO summit, which kicked of on Tuesday.