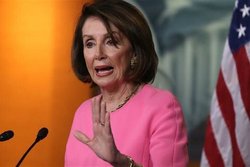 Speaker Nancy Pelosi (D-Calif.) on Thursday accused President Donald Trump of "bribery" in his dealings with Ukrainian leaders, linking the president's actions to the Constitution's impeachment clause even while emphasizing that Democrats remain undecided on whether they'll draft impeachment articles.

"That is in the Constitution, attached to the impeachment proceedings," Pelosi told reporters in the Capitol, The Hill reported.

She then explained the basis for the charge, which stems from a whistleblower's complaint that has since been supported by numerous government officials, that Trump leveraged US military aid to Kyiv to secure political favors from Ukrainian leaders.

"The bribe is to grant or withhold military assistance in return for a public statement of a fake investigation into the elections," she said, adding, "That's bribery."

Pelosi declined to say if the bribery charge would become an article of impeachment, insisting Democrats — even as they move ahead with their investigation — have not concluded Trump committed impeachable offenses.

"We haven't even made a decision to impeach," she stated, noting, "That's what the inquiry is about. And when the committees decide that, then they will decide what the articles are."

"But I am saying, that what the president has admitted to, and says it's 'perfect', I said it's perfectly wrong," she added, saying, "It's bribery."

Pelosi's comments arrived as some Democrats are urging their colleagues to abandon the Latin phrase that's dominated their impeachment inquiry up to now — "quid pro quo" — in favor of language like "bribery" and "extortion" that carries more direct connotations of explicit criminality.

Pelosi emphasized that Democrats aren't ready to begin drafting impeachment articles, stressing, "That'll be up to the committees to decide."

But she accused Trump of committing offenses more severe than those of President Nixon, who resigned in 1974 amid an impeachment proceeding.

"What President Trump has done on the record — in terms of ... [asking] a foreign power to help him in his own election and the obstruction of information about that, the cover up — makes what Nixon did look almost small," she said, adding, "Almost small."

Pelosi's press conference came a day after Democrats staged the first public hearing in their fast-moving impeachment inquiry, which is now in its eighth week. Conducted by the House Intelligence Committee, the hearing featured testimony from two career diplomats with insights into the Trump administration's campaign to press Ukrainian leaders to open investigations into Vice President Joe Biden and his son, as well as the 2016 elections in the United States — two probes that might have helped Trump's reelection.

William Taylor, the acting ambassador to Ukraine, and George Kent, the deputy assistant secretary of State for European and Eurasian affairs, testified for roughly five hours while the TV cameras rolled, telling lawmakers of dire concerns that Trump's pressure campaign threatened to empower Russia in the region at the expense of national security.

Pelosi has long alleged that Trump has nefarious ties with Moscow — a message she amplified Thursday.

"All roads lead to Putin," she stated, referring to Russian President Vladimir Putin.

Democrats are staging another public hearing Friday, to feature testimony from Marie Yovanovitch, the former US ambassador to Ukraine who was removed from Kyiv abruptly in May. Yovanovitch, in a closed-door deposition last month, told lawmakers that she was recalled for political reasons.