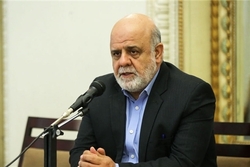 RNA - “I feel obliged to sincerely thank the honorable, pious nation of Iraq and the respectable government of the friendly and brotherly country of Iraq for a warm welcome that they gave to millions of Iranian pilgrims who created an epic event,” Masjedi said on Monday.

According to Fars News Agency, the Iranian ambassador said that Arbaeen will forge better brotherhood and friendship between the Muslim nations.

Nearly 18 million people, including over 3 million Iranians, visited Iraq during the past days to mark Arbaeen, the fortieth day of martyrdom of Imam Hossein (PBUH), grandson of Islam’s Prophet Mohammad (PBUH).