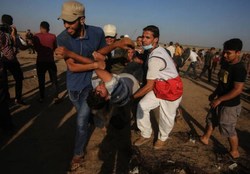 RNA - The Hague District Court weighed on Tuesday whether it should hear a lawsuit brought by a Palestinian man seeking compensation from Benny Gantz for his role in the killing of six of his relatives during the Israeli war on the besieged Gaza Strip in 2014.

On July 20, 2014, Ismail Ziada lost his mother, three brothers, a sister-in-law, and a 12-year-old nephew when their family home was bombed by the Israeli air force.

A visitor was also killed in the Israeli bombardment.

“I was shot at a very close range with a rubber coated metal bullet in the head. I witnessed another boy being shot in the head next to me, dying on the spot,” said Ziada about his encounters with the Israeli army.

Ziada, who now lives in the Netherlands, filed a civil lawsuit in 2018 seeking damages from Gantz, who was the chief of staff of Israel’s military at the time of the bombing, and the then-air force commander Amir Eshel.

The Tuesday session addressed a motion filed by Gantz and Eshel’s lawyers asking the court to dismiss the case. They argued the ex-commanders were immune because the Dutch court had no jurisdiction over the case.

Ahead of the hearing, Ziada’s lawyer, Liesbeth Zegveld, said Palestinians from Gaza could not receive fair treatment in Israeli courts.

Israel launched several wars on the Palestinian coastal sliver, the last of which began in early July 2014. The military aggression, which ended on August 26, 2014, killed nearly 2,200 Palestinians. Over 11,100 others were also wounded in the war.

The Gaza Strip has been under Israeli siege since June 2007. The blockade has caused a decline in the standards of living as well as unprecedented levels of unemployment and unrelenting poverty.