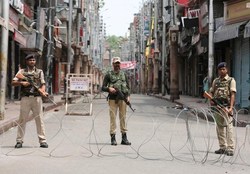 Foreign Minister Mohammad Javad Zarif of Iran has expressed concern about the current situation of Muslim people in the Indian-controlled Kashmir.

RNA - Zarif made the remarks on Sunday in a meeting with the visiting Foreign Secretary of India Vijay Keshav Gokhale in the Iranian capital of Tehran on Sunday.

The top Iranian diplomat expressed hope that the situation would improve for the Muslims there.

On August 5, India revoked the semi-autonomous status of Kashmir. It deployed troops to the region to stymie potential protests, imposed severe restrictions on movement, and cut all telephone and internet services.

The controversial move angered both Pakistan, which controls the other part of Kashmir, and the local population.

Authorities in the Indian-controlled Kashmir have detained about 4,000 people since New Delhi scrapped the Muslim-majority Himalayan region’s special autonomous status.

Media reports, citing a recent government data, reported on Thursday that Indian forces had arrested more than 3,800 people across the region over the past few weeks.

Zarif also said Tehran and New Delhi have been expanding cooperation in various sectors, calling for further strengthening of relations.

India's Minister of State for External Affairs V Muraleedharan said in July that the country's relations with Iran are not influenced by any third party, as the US tightens the screws on the customers of the Iranian crude oil.