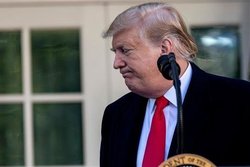 More than 4 in 10 respondents in a poll released on Wednesday stated that they believe the US economy will weaken if President Donald Trump is reelected next year.

RNA - In the Economist/YouGov survey of roughly 1,500 US adults, 42 percent said the economy will suffer if Trump wins another term in office, compared to 30 percent who expected the economy to improve, The Hill reported.

Another 15 percent expected the economy to hold steady if Trump were reelected, while 13 percent were unsure of the potential economic impact of another term for him.

Respondents were split evenly at 35 percent over whether a Democrat winning in 2020 would improve or worsen the economy. Another 13 percent expected the economy to remain unchanged in that scenario, while 17 percent said they were unsure how a Democratic victory would impact the economy.

The success of Trump’s reelection bid will depend largely on the state of the US economy, which has enjoyed unemployment near record lows and solid growth throughout his term. While the president is widely unpopular beyond his base, Trump had previously received decent marks for his handling of the economy.

Even so, months of growing fears about a potential recession before the 2020 election and the rising costs of Trump’s trade war with China have dampened the president’s standing on economic issues.

The US added just under 100,000 private sector jobs in August, according to a federal jobs report released last Friday. That level is close to what economists consider the minimum monthly job gain needed to prevent an increase in unemployment and sustain more than a decade of economic expansion.

Trump has been largely dismissive of concerns about a recession, but has amped up pressure on the Federal Reserve to slash interest rates and boost the economy with levels of stimulus last seen during the 2008 recession.