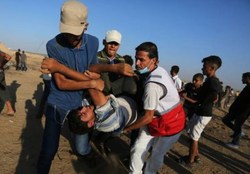 Israel’s so-called High Court of Justice has ruled that the military can withhold bodies of the Palestinians that it kills to grant the Tel Aviv regime leverage in future negotiations with Palestinians, drawing immediate condemnation from Palestinians.

RNA - The verdict was issued on Monday after a majority vote by an expanded panel of seven judges. Supreme Court President Esther Hayut and Justices Neal Hendel, Isaac Amit and Noam Sohlberg were in favor, while justices Uzi Vogelman, Daphne Barak-Erez and George Karra, who framed different minority opinions, opposed the decision.

The Israeli justices alleged in their decision that withholding Palestinians’ bodies falls within the purview of the Israeli regime’s security, and claimed that the practice was not illegal under international law governing armed conflict.

The measure was adopted in response to a petition by the families of six Palestinians, whose bodies are currently in the Israeli regime’s possession.

It reverses a 2017 High Court ruling on the matter, which determined that holding on to bodies was illegal, in a “violation of human rights as well as the rights of the deceased and his family.”

It noted at the time that Israeli authorities could hold on to the bodies of Palestinians who had purportedly committed “particularly egregious” acts of “terror,” and that the decision should be anchored in a specific and explicit law.

Israeli military forces regularly take custody of Palestinians’ bodies. Sometimes the bodies are later returned to their families for burial. At other times, they are withheld to prevent celebratory funerals in Palestinian towns, or with a view to using them in negotiations to retrieve the bodies of Israeli soldiers held by resistance groups.

According to Palestinian campaigners pushing for the release of the remains of those killed by Israeli forces, the Tel Aviv regime currently holds over 300 Palestinians bodies.

‘An extension of Israel’s violations’

Meanwhile, the Palestinian Ministry of Foreign Affairs and Expatriates has censured the Israeli High Court’s decision, and described it as an extension of the Israeli regime’s violations and its continued crimes and punitive measures against Palestinian people.

“Once again, the so-called judicial system in the occupying power, including the Israeli High Court, proved that it is an integral part of the occupation system, and has nothing to do with the principles and foundations of justice, and issues its decisions based on what the colonial system itself determines and decides for it,” the ministry said in a statement released on Tuesday.

The Palestinian foreign ministry emphasized that it is exerting efforts at all international levels in order to recover the recover the bodies of Palestinian martyrs, and will continue to expose the crime of withholding the remains of deceased Palestinians.

It termed the Israeli regime’s move to hold slain Palestinians’ remains as a policy of extortion and bargaining aimed at achieving colonial purposes.