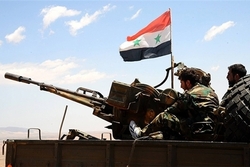 The Arabic-language SANA news agency quoted a battlefield source as saying that the Syrian Army has declared implementation of truce in the demilitarized zone while reiterating that it will respond to any violation of ceasefire by the terrorists.

After taking full control of al-Tamane’ah strategic town, the Syrian Army continued its advances in Southern Idlib and regained control of the towns of al-Khovein al-Kabir, al-Sakiat, Eastern and Western Farms of al-Tamane’ah, Tal Turki, Tal Sayyed Jafar and strategic Sayyed Ali Hilltop just one kilometer to the North of al-Tamane’ah that overlooks al-Azizieh-Tahtaya Road.

The battlefield sources also reported that the Syrian Army troops killed at least 37 Tahrir al-Sham al-Hay’at (the Levant Liberation Board or the Al-Nusra Front), Haras al-Din and Turkistani terrorists and destroyed several of their military vehicles and equipment.

A notorious Belgian member of the ISIL terrorist group who had executed over 100 people in the city of Raqqa was captured in the same city on Saturday.

The newspaper said 35-year-old Abu Soleiman has decapitated over 100 people in Raqqa.

Meantime, Hadoushi is also said to have been the main financial supplier of the terrorist attacks in Paris and Brussels.

A sum of 3,000 Izadis are still in custody of the ISIL terrorists in Syria, an Iraqi parliamentarian said.

According to Fars News Agency, the representative of Izadi in the Iraqi parliament told the Arabic-language al-Ma'aloumeh news website that the terrorists still have 3,000 abducted Izadi people in their captivity.

He underlined that all the abducted Iraqi Izadi people are still held by the ISIL in Syria.

The Izadi people of Iraq became target of crimes of ISIL terrorists in 2014.

Back in August 2014, ISIL terrorists overran the town of Sinjar, killing, raping, and enslaving large numbers of Izadi Kurds.

Saudi-led coalition has no reservation to shed all Yemenis’ blood: Houthi