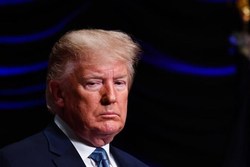 US President Donald Trump, known for his erratic tweeting, has seemingly given away important details about American’s military satellite after posting an image of what he said was a failed Iranian space rocket launch.

RNA - The American head of state posted a satellite image on Friday that allegedly showed a launching pad in Iran’s Semnan province littered with debris from what was said to be Iran’s Safir (Ambassador) space launch vehicle.

“The United States of America was not involved in the catastrophic accident during final launch preparations for the Safir SLV Launch at Semnan Launch Site One in Iran,” Trump said. “I wish Iran best wishes and good luck in determining what happened at Site One.”

Iran reacted refuted the claim by arranging a tour of the Nahid 1 satellite, which is due to be launched into orbit on board the Safir soon.

On Saturday, however, American experts warned that the Republican head of state might have caused a huge security risk by publishing the photo and revealing exciting details about America’s fleet of spy satellites currently orbiting the Earth.

Washington had until now kept notoriously secretive about its spy satellites but Trump’s image, which he seems to have shot with his smartphone from a classified print copy presented at a security briefing, gave experts enough material to shed light on their operations.

Astronomer Marco Langbroek used the angle of the image to identify exactly which satellite took the image. He concluded that, given the possible time of the photo on 9.44 am UTC on August 29, and the angle it was taken, the satellite in question is optical reconnaissance satellite USA 224.

“It is a very good match so there is no doubt in my mind that it is an image taken by USA 224,” Langbroek said in a tweet.

Cees Bassa, another astronomer, said the satellite was some 382 kilometers from the launch pad when it took the photo.

According to Press TV, Bassa noted that USA 224 is makes use of a 2.4-meter mirror, which rival the Hubble space telescope and can produce “the sharpest images of the Earth’s surface.”

Meanwhile, Brian Weeden, from the space advocacy organization Secure World Foundation, was able to work out the exact resolution of the image.

“This will have global repercussions,” Joshua Pollack, a nuclear proliferation expert, told CNBC.  “The utter carelessness of it all. So reckless.”

Trump remained defiant against the criticism, saying he had an “absolute right” to release the photo.