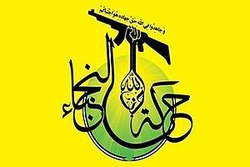 “We are well aware that Israeli [troops] are also present at the US embassy as well as the Ein al-Assad military base,” the popular resistance force chief said.

Certain efforts by a “foreign power” are underway to revive the Daesh terrorist group in the Arab country, al-Kaabi said.

His remarks came in the wake of recent airstrikes in Iraq against the positions of pro-government Popular Mobilization Units (PMU), also known as Hashd al-Sha’abi.

Following the strikes, the spokesman of Kata'ib Hezbollah, another prominent Iraqi resistance group, said the attacks on the positions of Hashd al-Sha’abi were an attempt by the US and Israel to revive Daesh.

Mohammed Muhyee added that the next stage, which has been planned by the US, is to return thousands of foreign-backed Daesh terrorists to the Iraqi-Syrian border.

The attacks "were not accidental," but rather planned in advance after continued monitoring operations by Israeli and American drones, Muhyee pointed out.

On Tuesday, Iraqi Prime Minister Adel Abdul-Mahdi said his country’s armed forces were fully prepared to respond firmly to any act of aggression launched either from outside or inside Iraq

“The prime minister pointed to the high readiness of our armed forces to defend Iraq, its citizens and state institutions in addition to diplomatic missions operating in Iraq," his media office said in a statement released following a cabinet session.

"He also stressed the Iraqi forces’ readiness to respond firmly and by all means available to any aggression launched either from outside or inside Iraq.”

Daesh unleashed a campaign of death and destruction in Iraq in 2014, overrunning vast swathes of territory in lightning attacks. Iraqi government forces and allied fighters then launched operations to eliminate the terror outfit and retake lost territory.

The PMU had a key role in flushing Daesh out of the areas it had occupied in Iraq.

In December 2017, Iraq declared the end of the anti-Daesh campaign. The group’s remnants, though, keep staging sporadic attacks across Iraq.