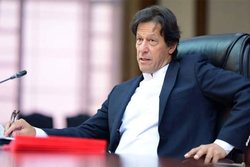 Pakistani Prime Minister Imran Khan has called on the entire nation to join mass demonstrations against the Indian government’s decision to revoke special autonomous status of the disputed Himalayan region of Kashmir.

RNA - In a posting on Twitter on Thursday, Khan said, "I want all Pakistanis to come out tomorrow 12 noon-12.30 pm to show solidarity with the Kashmiri people,"

"We must send a strong message to Kashmiris that our nation stands resolutely behind them," the premier added.

Early this week, Khan called on Pakistanis to begin holding weekly nationwide rallies in support of the Kashmiri people.

Khan warned in a speech on Monday that the issue of Kashmir could lead to a nuclear war between Islamabad and New Delhi if the international community failed to intervene.

The Pakistani military announced earlier Thursday the testing of a surface-to-surface ballistic missile, with the army's spokesman saying the weapon was "capable of delivering multiple types of warheads".

Tensions have been soaring between Islamabad and New Delhi for weeks in the wake of Indian Prime Minister Narendra Modi's move to strip India's portion of Kashmir of its autonomy and bring it under direct rule.

After the decision on the special status, New Delhi dispatched thousands of additional troops to the Himalayan region, declared a strict curfew, shut down telecommunications and internet services, and arrested political leaders and pro-independence campaigners.

India’s behavior has drawn criticism from the people of Kashmir and Pakistan as well as human rights groups and the UN.

In the wake of the move, Pakistan has expelled the Indian ambassador, halted bilateral trade, and suspended cross-border transport services.

Pakistan recently said it was considering a complete closure of airspace to India and blocking Indian land trade with Afghanistan via Pakistan.

In recent days, India and Pakistan have exchanged heavy fire across the militarized de facto border in the disputed Kashmir valley.

According to Press TV, UN Secretary-General Antonio Guterres has urged all parties to exercise restraint.

Relations between the nuclear neighbors nosedived in February, when over 40 Indian paramilitaries were killed in a bomb attack in Kashmir. New Delhi blamed Pakistan-based militants, but Islamabad denied any involvement.

Ties have been rocky since August 1947, when the subcontinent was divided into two independent states - Hindu-majority India and Muslim-majority Pakistan - after the British Raj was dismantled.

Millions were uprooted in one of the largest mass migrations in history, with experts estimating that at least one million died in communal violence unleashed by the partition that continues to haunt the subcontinent to this day.

Kashmir has been split between India and Pakistan since their partition. Both countries claim the territory in its entirety, over which they have fought three wars so far.

India regularly accuses Pakistan of arming and training militants and allowing them to cross the restive frontier. Pakistan strongly denies the allegation.