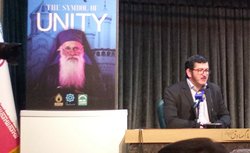 He also added, “The research that Mr. Taqavi has done on the Bible at the Besharat Institute has helped us make this documentary.”

Mr. Nemati said, “We travelled to various countries to make this documentary and we talked with Christians and clergy until we reached Georgia and met with Archbishop Dr. Malkhaz Songulashvili [the head of the Evangelical Baptist Union of Georgia] who had the experience of participating in the Arba’in pilgrimage.”

The director and documentary filmmakers continued, “It took about two years for Dr. Songulashvili to coordinate his plans and participate in the Arba’in pilgrimage.”

Addressing the documentary filmmakers, he said, “In order to speak in the international arena and to accept our statements and accept that we have nothing but Imam al-Husayn in all areas, including jihad, martyrdom, sacrifice, etc., if we want to speak, we must refer to Imam al-Husayn.”