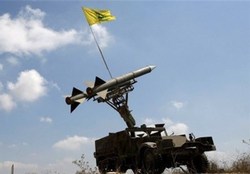 Lebanon’s resistance movement Hezbollah says it has shot down two Israeli drones flying over areas near the capital Beirut.

RNA - Hezbollah said in statements early on Sunday that its rockets had downed the drones flying over Dhahyeh region, a suburb south of Beirut.

The group said one of the drones fell in Dhahyeh and the second drone exploded near the ground in another nearby suburb.

Hezbollah’s shooting down of the drones came just hours after Israeli forces tried to hit targets in Damascus in neighboring Syria.

Syrian military said the attacks were unsuccessful and that its air defense systems had intercepted the Israeli missiles.

The Israeli regime said the attacks had inflicted damage on targets related to Iran and its allied militia, clearly a reference to Lebanon’s Hezbollah.

Hezbollah has been assisting the Syrian government in its years-long fight against terrorism in the Arab country.

However, it has denied claims it is fighting for Iran in Syria, saying the mission is meant to prevent a spillover of militancy into Lebanon.

There was no immediate reaction from Israel on Hezbollah’s downing of drones in southern Beirut.

According to Press TV, the Tel Aviv regime has been cautious over the past years in its military encounters with Hezbollah, a group which seeks a total eviction of Israel from the occupied Palestinian territories.

It was not also clear whether Hezbollah’s downing of the Israeli drones was a swift attempt to respond to Israeli attacks in southern Damascus late on Saturday.

The Lebanese group has provided evidences suggesting that the regime in occupied Palestinian territories have transferred weapons to strongholds of terrorists in Syria.