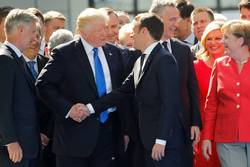 US President Donald Trump announced that if Europe does not take ISIS (known as ISIL or DAESH) fighters held as prisoners, he will have to release them into the countries from which they came, such as Germany and France.

"If Europe doesn't take them, I'll have no choice but to release them into the countries from which they came, which is Germany and France and other places," Trump stated, adding, "The United States is not going to put them in Guantanamo and pay for that."

Speaking to reporters outside the White House, Trump declared that India, Pakistan, Turkey, Russia or even Iran must shoulder the burden of fighting “terrorists” in Afghanistan, insisting it would be unfair if the United States spends another 19 years cleaning up its mess.

“At a certain point Russia, Afghanistan, Iran, Iraq, Turkey, they are going to have to fight their battles too,” the American president continued in response to a question about the alleged reemergence of the ISIS terror group in Afghanistan.

“All of these other countries where ISIS is around…all of these are going to have to fight,” he warned. The US would not spend “another 19 years” in what is already the longest war in its history.

It is not the first time Trump demanded Europe “take back” its nationals who went to Syria and Iraq to fight on the side of ISIS and other terrorist entities. Trump has repeatedly voiced his dismay at the EU’s reluctance to repatriate and prosecute European fighters captured in the Middle East.

In early August, Trump warned that some 2,500 jihadists captured by Washington and its allies in Syria and Iraq could soon be roaming European soil unless the EU agrees to take back expat fighters of its own accord.

“You’ll always gonna have somebody around, but right now we’ve captured over 10,000 – we have 2,500 ISIS (also known as ISIL or Daesh) fighters that we want Europe to take, because they were going back into Europe, into France, into Germany, into various places,” Trump said in August.

“So we have thousands of ISIS fighters that we want Europe to take and let’s see if that take them. And if they don’t take them, we’ll probably have to release them,” he added.

Also in February, Trump was talking about 800 fighters – less than a third of the current number.

Back then, Trump stressed that militants were likely to “permeate” Europe once US forces withdraw after the caliphate's defeat, which he attributes solely to American efforts.

Trump startled his generals when he announced a withdrawal of the US troops from Syria in December, since “the only reason” for the 2,000-strong contingent's presence had been to defeat the terror group.

In the weeks following his abrupt announcement, The American leader walked that back somewhat, saying in March that 400 US troops would remain in Syria indefinitely.

Thousands of people, including men, women and children from more than 50 countries, are lingering in detention camps in Northeastern Syria, held by Washington-backed Syrian Democratic Forces (SDF).