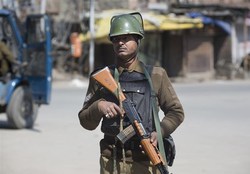 Pakistan says it will take India to the International Court of Justice (ICC) over New Delhi’s recent decision to strip the disputed Muslim-majority Himalayan region of its autonomy.

RNA - “We have decided to take the Kashmir case to the International Court of Justice,” Pakistani Foreign Minister Shah Mehmood Qureshi said on Tuesday. “The decision was taken after considering all legal aspects.”

The top Pakistani diplomat said the case would center on alleged human rights violations by India in the contested valley.

On August 6, Pakistan’s Prime Minister Imran Khan had said in an address to the parliament that he was weighing taking the matter to international forums and organizations.

“We will fight it at every forum. We’re thinking how we can take it to International Court (of Justice)... to the United Nations Security Council,” Khan said at the time.

India scrapped the special status of its portion of Kashmir on August 5. New Delhi claimed that the decision was necessary for Kashmir’s economic development and to stop “terrorism.”

In the wake of the move, Pakistan expelled the Indian ambassador, halted bilateral trade, and suspended cross-border transport services.

The 15-member UN Security Council held a closed-door meeting on the matter at the request of China and Pakistan on August 16.

After the decision to scrap Kashmir’s autonomy, Indian authorities also imposed security restrictions on the territory.

The Indian Home Ministry tweeted last week that the restrictions “were being eased out in a phased manner” in the valley.

The latest media reports say, however, that several areas of Jammu and Kashmir are still facing a curfew-like situation.

Kashmir is divided between India, which rules the populous Kashmir Valley and the Hindu-dominated region around Jammu city — and Pakistan, which controls a piece of territory in the west.

India and Pakistan have fought three wars over the territory.