We must adopt revolutionary stances on Kashmir 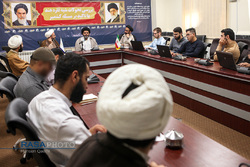 Rayhan ‎Hussain emphasized that we must not have bilateral positions, that is, both for the ‎‎happiness of India and for the happiness of Pakistan, but we must take revolutionary ‎‎stances regarding Kashmir.‎

RNA – An academic conference entitled “Developments in the Indian Subcontinent with an ‎‎‎‎‎Emphasis on the Kashmir Issue” was hosted by Rasa News Agency at the headquarters ‎‎of ‎‎the ‎news agency in Qom. ‎

Speaking at the conference, Mr. Rayhan Hussain said, “Kashmir has been divided into three ‎parts between Pakistan, India and China. We aren’t witnessing a political war in Kashmir but ‎rather a war of faith and values.” ‎

The political expert on Kashmir pointed to the presence of Turkey and Iran in Kashmir and ‎added, “Turkey’s presence in Kashmir is inconspicuous, although this country’s flag has been ‎seen in some protests. However, Iran’s cultural presence in Kashmir is very visible and even ‎‎32% of the words that exist in the dialects of the people of this region are of Persian origin.”‎
‎ ‎
He described the situation in Kashmir as “miserable” and said, “If we didn’t have a presence ‎in Kashmir and don’t react properly, we will see an increase in problems and we will lose this ‎area forever.”‎

Mr. Hussain emphasized that we must not have bilateral positions, that is, both for the ‎happiness of India and for the happiness of Pakistan, but we must take revolutionary ‎stances regarding Kashmir.‎