The US and Israel are seeking influence in Kashmir 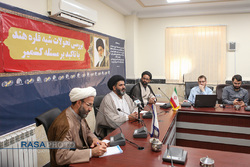 Dr. Abu Mahdi said, “The United States and the Zionists have sought influence in India and ‎Pakistan since 1888 ‎until today and are aware of Kashmir’s strategic position in the region.” ‎

RNA – An academic conference entitled “Developments in the Indian Subcontinent with an ‎‎‎‎Emphasis on the Kashmir Issue” was hosted by Rasa News Agency at the headquarters ‎‎of ‎the ‎news agency in Qom. ‎

The scholar continued, “Alongside Article 370, there was an article named Article 35A which ‎was added in 1954. This article stipulated that, for example, only the permanent residents of ‎Jammu and Kashmir had the right to buy land in Kashmir and that a Kashmiri woman could ‎only marry a Kashmiri man.”‎

He said, “Israel and Saudi Arabia have conspired with India against the people of Kashmir ‎and even Turkey was involved. ‎The United States and the Zionists have sought influence in ‎India and Pakistan since 1888 until today and are aware of Kashmir’s strategic position in the ‎region.” ‎

Dr. Abu Mahdi stressed, “Because of its location on the border with China, Kashmir enjoys a ‎very good strategic location for the United States to be able to dominate the region by ‎establishing itself in the region and on the other hand, Kashmir has a lot of resources and ‎wealth.”‎

His Eminence added, “The people of Kashmir are also revolutionary people such that if they ‎feel that Saudi Arabia is trying to bully Iran, they will come to the streets in support of the ‎Islamic Republic of Iran and on the other hand, the culture of Iran and Kashmir is very close. ‎Taken together, all of these factors have made Kashmir a sensitive area for the United ‎States and Israel.”‎