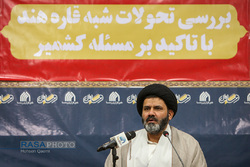 An academic meeting, entitled “Developments in the Indian Subcontinent with an Emphasis ‎‎on the Kashmir Issue,” was held at the headquarters of Rasa News Agency with guest ‎speaker, Hujjat al-Islam Sayyed Shafaqat Hussain Shirazi‎.‎

RNA – An academic conference entitled “Developments in the Indian Subcontinent with an ‎‎Emphasis on the Kashmir Issue” has been hosted by Rasa News Agency at the headquarters ‎of the ‎news agency in Qom. A number of experts from India and Pakistan were present. ‎ ‎

Hujjat al-Islam Sayyed Shafaqat Hussain Shirazi, the international leader of the Majlis ‎‎Wahdat-e-Muslimeen, one of the largest Shi’ah institutions in Pakistan, and several speakers ‎‎and cultural and political activists from Indian-occupied Kashmir discussed the history of the ‎subcontinent, the current ‎domestic situation and the international implications of the ‎revocation of the special status of ‎the state of Jammu and Kashmir by the Government of ‎India.‎

At the beginning of the conference, Hujjat al-Islam Shirazi ‎noted the history of conflict and ‎dissension between Muslims and the colonizers in India and Kashmir, saying, “The United ‎Kingdom, France and Portugal are among the oldest colonial powers in India and such, they ‎divided the country between themselves. They plundered India’s wealth and natural ‎resources.”‎

The Pakistani scholar ‎added that the arrogant powers turned to the old policy, namely, the ‎creation of sedition, in order to better control the country’s resources. In the first step of ‎this plot, they divided the similar Urdu and Hindi languages in 1867 by making the Devanagari ‎alphabet the official script of Hindi and the Perso-Arabic alphabet the official script of Urdu.‎

He said that the next step was to strengthen the Deobandi movement and Hindu nationalist ‎movements and to highlight the differences between Muslims and Hindus and added, ‎‎“Despite these attempts, the Kashmiri people, both Sunni and Shi’ah Muslims, withstood the ‎colonists.”‎

Hujjat al-Islam Shirazi ‎stated, “Before the beginning of this sedition, a man named Sayyed ‎Ahmad Khan [1817- 1898] was trying to create unity among the people of India but after ‎this sedition began, he withdrew from his principles and advocated the two-nation theory.” ‎

He noted that during this time, there was a sectarian strife between Muslims and Hindus, with ‎Hindus claiming that they are the indigenous citizens of India and that Muslims are ‎immigrants who must either leave the country or surrender to the Hindus and follow their ‎religion.‎

Hujjat al-Islam Shirazi ‎‎said that the issue of Kashmir is an uncompleted agenda by India and ‎added, “The enemies of Islam are trying to harm Islam in every way and are endangering ‎the rights of Muslims under different plots, including the abolishment of their rights.” ‎

He added that Saudi Arabia has supported the actions taken by some Indian Muslim ‎personalities and that there are policies that have been taken in response to demands by the ‎Zionists which are similar to those policies being taken by Israel in the occupied Palestinian ‎territories. The Zionist regime has established a relationship with the Rashtriya Swayamsevak ‎Sangh (RSS), a right-wing Hindu nationalist paramilitary organization, which has stirred up ‎conflict between the Hindu majority and the Muslim minority in the country.‎

Hujjat al-Islam Shirazi ‎also discussed the fact that Kashmir is split between three countries – ‎Pakistan, India and China but the issue of Kashmir is the concern of the majority Kashmiri ‎Muslim people who desire autonomy and added, “The people of Kashmir are suffering great ‎persecution due to the actions by the Indian government. Muslims must take measures to ‎support the Kashmiri Muslim people it’s too late, just like the situation in Palestine.” ‎