House of Saud deprived Qatari Muslims from participating in Hajj 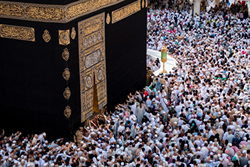 The political actions of the Saudi regime in regard to the Hajj pilgrimage has prevented the ‎Muslims of Qatar from participation in the rituals of the Hajj. ‎

RNA – Due to the fact that Qatar, with the help of several regional parties, including Turkey ‎and Iran, succeeded in overcoming the blockade by Saudi Arabia and its allies, the House of ‎Saud is outraged and is currently taking revenge against Qatari citizens.‎

The House of Saud is using the Hajj pilgrimage as a tool against Qatar by preventing Qatari ‎Muslims from performing the divinely-ordained Hajj rituals for the second consecutive year.‎
‎ ‎
The political actions of the Saudi regime disrupted the space between Rukn [Corner] and the ‎Maqam [Station of Abraham] and the Muslims of Qatar were denied access to these two ‎sacred sites and were deprived of performing the Hajj.‎
‎ ‎
Saudi Arabia continues its vicious allegations by refusing to host Qatari Muslims and has ‎prevented them from entering the Land of Revelation for the second consecutive year.‎

In response to Saudi Arabia’s Ministry of Hajj and Umrah, Qatar’s National Human Rights ‎Committee earlier expressed its readiness to serve the Qatari pilgrims and declared that this ‎was a formal matter and no practical steps had been taken in this regard.‎

The Saudi-led coalition cited Qatar’s alleged support for terrorism as the main reason for ‎their actions, insisting that Qatar has violated a 2014 agreement with the members of the ‎Gulf Cooperation Council (GCC). Saudi Arabia and other countries have criticized Al Jazeera ‎and Qatar’s relations with Iran. ‎