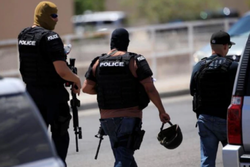 Nine people have been killed in a mass shooting in in Dayton, Ohio, the city police confirmed, while at least 16 were sent to hospital with injuries. The gunman was shot by the police responding to the incident.

RNA - The shooting happened in the area of East 5th Street in the Oregon District of Dayton in the early hours of Sunday local time and just hours after another mass shooting in El Paso, Texas, where a single gunman killed 20 people and injured 26 others, World News reported.

The Dayton police department announced that "the shooter is deceased. There are 9 others also deceased. At least 16 others went to area hospitals with injuries".

Some reports suggest there may have been more than one shooter involved in the attack, adding that the police are searching for a man wearing a mask, who may have left the area in a dark-coloured Jeep.