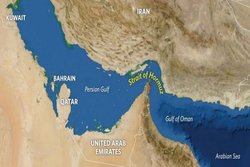 The new US defense chief has claimed that a Washington-led scheme to police the Persian Gulf and Strait of Hormuz against purported Iranian threat will soon gain commitments of several allied countries despite recent reports that even key US allies have snubbed the anti-Iran effort.

RNA - US Defense secretary Mark Esper further asserted on Saturday that representatives from over 30 countries had attended a conference earlier this week at Florida-based headquarters of the military’s Central Command (CENTCOM) to discuss what is dubbed as Operation Sentinel, a military coalition of allied nations to supposedly protect shipping lanes near Iranian territorial waters in the Persian Gulf.

“We had various degrees of commitment, so I think we’ll have some announcements coming out soon in the coming days where you’ll see countries begin to sign up,” Esper told reporters while traveling to Australia to take part in the Australia-US  Ministerial Consultations.

However, he refused to identify the countries that have submitted to such commitment, and when asked if any Asian countries have offered to join the US-led operation, Esper only replied, “Time will tell.”

Esper’s claims came after US Secretary of Stated Mike Pompeo revealed last week that Washington had called on France, Germany, Australia, Japan and South Korea to contribute to the so-called Operation Sentinel in the Persian Gulf.

Prominent US daily The New York Times, however, reported on Thursday that the Trump administration’s request to build the anti-Iran “coalition” in the Persian Gulf has been snubbed by either silence or outright rejection of its allies, including a blunt “no” from Germany.

The daily further underlined that many other European leaders have further tried to keep their distance from US President Donald Trump and his policy of “maximum pressure” on Iran in efforts to avoid being seen as aiding the hawkish approach.

It further noted that Washington is trying to project its anti-Tehran campaign as a bid to secure the Persian Gulf, but "the Europeans argue that Washington created the problem in the first place by trying to kill off Iran’s oil exports.”

On Wednesday, German Foreign Minister Heiko Maas said that his country would not be joining the Americans.

“Germany will not take part in the naval mission proposed and planned by the United States,” Maas said.

“We are in close coordination with our French partners. We consider the ‘maximum pressure’ strategy to be wrong. We do not want a further military escalation; we will continue to focus on diplomacy.”

Citing an informed diplomatic source, Spanish El Confidencialnewspaper also reported that Madrid had "no intention of participating in a mission led by the US in Hormuz."

Neither have France, Italy nor Sweden responded favorably to Britain’s suggestion of a European escort force, separate from the Americans, even after Iran seized the British-flagged tanker.

Moreover, Japan's Mainichi newspaper cited unidentified government sources as saying on Friday that Tokyo had decided not to deploy any warships to the Persian Gulf.

It further said Japan’s government would likely face opposition at home to any military venture that could put its Self Defense Forces in harm's way or threaten the well being of Japanese living in Iran.

According to the New York Times, "The refusals have underscored the divergent policies toward Iran and are aggravating distrust and resentment on both sides."

Britain, meanwhile, has opted to increase its own military assets in the Gulf rather than join with the US-led operation after one of its UK-flagged oil tankers was seized by Iranian forces in July.

US aims to 'internationalize' its anti-Iran naval mission

The US defense chief also claimed on Saturday that Washington’s goal with Operation Sentinel “has always been to internationalize it” but that regardless of countries’ commitments, the US will continue to provide both air and Navy-based surveillance in the region.

“What we want to do is stay on the diplomatic path, and we want to grow a coalition that will help us do that,” he further proclaimed.

“Nobody wants to be drawn into conflict with Iran. That’s why we first proposed the idea of a coalition of like-minded allies and partners,” Esper added.

“I think the key is that there is a unity of effort, a shared commitment, if you will, to preserving freedom of navigation in the straits, in the Gulf and deterring provocative behavior that could lead to a miscalculation that can escalate into a conflict. We want to avoid that.”

Tensions with Iran have nearly boiled over in the year after Trump decided to withdraw the US from the Obama-era Iran nuclear agreement and imposed brutal economic sanction against Tehran.

Since then, the US has accused Iran of attacking oil tankers in the Persian Gulf region and protested the shooting down of an advance US surveillance drone intruding into Iranian territorial waters. In a retaliatory move, Trump initially threatened a missile strike, only to change his mind at the last minute. He later claimed that American forces had downed two Iranian drones without providing a shred of evidence in face of fierce rejection of the claim by Tehran.

Tensions in the Persian Gulf flared up after a series of suspicious attacks on oil tankers, following the US deployment of a new naval group and B-52 bombers to the region amid claims of unspecified Iranian threats.

The UK waded into the standoff by seizing an Iranian oil supertanker off Gibraltar at the US request, according to local officials. Iran responded by detaining a UK-flagged oil tanker in the Persian Gulf.

This is while the Trump administration has pledged to bring Iran's vital oil exports down to zero, but the shipments have continued to reach major customers, especially in Asia.