US and Europe are not honest about human rights 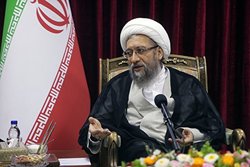 The chairman of Iran’s Expediency Discernment Council ‎discussions between the Iranian and ‎Chinese governments and the people in regard to the excessive and arrogant policies of the ‎American government and emphasized the expansion of economic and cultural interaction ‎between the two countries.‎

RNA – On July 30th, Ayatollah Sadeq Amoli-Larijani, the chairman of Expediency Discernment ‎Council, met with Song Tao, the head of the International Liaison Department of the ‎Communist Party of China, and welcomed a delegation of Chinese guests to the Islamic ‎Republic of Iran.‎

The senior Iranian politician said, “The strategic relationship between the two countries has ‎entered a new phase with the message of the Supreme Leader of the Islamic Republic ‎‎[Ayatollah Khamenei], conveyed by the Honourable Speaker of the Parliament [Ali Larijani] to ‎your President [Xi Jinping]. We hope that Iran and China, with many commonalities in their ‎civil, cultural, economic and political spheres, will play a more prominent role in the ‎international arena. We find your visit useful in promoting these partnerships and consider ‎this trip a new milestone in the strategic development and cooperation of the two countries.”‎
‎ ‎
Ayatollah Amoli-Larijani said, “Today, China and Iran can play role on the world stage against ‎American unilateralism. Americans have had a hegemonic nature in world for several decades ‎and are creating tension by engaging in oppression throughout the world with their army. ‎Iran doesn’t seek to create tension, but will certainly defend its authority and interests in the ‎event of an act of aggression by the enemies.”‎

He said, “We don’t see any honesty from Americans and Europeans regarding human rights. ‎You see the humanitarian catastrophes and cruelty that the West and [Takfiri] terrorist ‎groups, which they have supported, have carried out in Afghanistan, Iraq, and Syria. They ‎have also engaged in the detention of refugee children in unacceptable conditions and have ‎put them in cages. These are indications of dishonesty and the unacceptable standards of ‎the West regarding human rights.”‎
‎ ‎
A high-level delegation of the Chinese Communist Party, headed by Song Tao‎, has been in ‎Tehran since July 28th at the invitation of the Expediency Council. The discussed the ‎expansion of strategic cooperation between Iran and China in the context of Tehran-Beijing ‎relations.‎

Tags: Larijani Iran China
Short Link rasanews.ir/201s5F
Share
0
Please type in your comments in English.
The comments that contain insults or libel to individuals, ethnicities, or contradictions with the laws of the country and religious teachings will not be disclosed