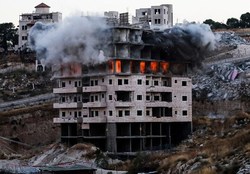 Lebanese Foreign Minister Gebran Bassil says recent demolition of a cluster of Palestinian homes in occupied East Jerusalem al-Quds is in line with the Israeli regime’s policy to kill the Palestinian cause.

RNA - “Israel is demolishing homes in the West Bank, displacing landowners from al-Quds and its suburbs, and rejecting the right of return within the frame of the [so-called] deal of the century in a bid to liquidate the Palestinian cause,” Bassil wrote in a post published on his official Twitter page on Thursday.

He added, “There are people who are creating problems to distract our Palestinian brethren from the greatest danger that is yet to come. The international community has turned a blind eye to truth, and some of those advocating truth are disregarding the issue as well.”

On Wednesday, the United States blocked the United Nations Security Council from passing a resolution condemning Israel’s demolition of about 70 homes in 10 apartment buildings in Sur Bahir neighborhood.

Indonesia, Kuwait and South Africa had earlier circulated a draft statement, expressing grave concern over the demolitions. They stated that such practice would undermine the viability of the so-called two-state solution, and the prospect for a just and lasting resolution of the decades-long conflict between the Israelis and Palestinians.

The secretary general of the Palestine Liberation Organization (PLO), Saeb Erekat, strongly condemned the demolitions on Tuesday, calling on the international community to push the International Criminal Court (ICC) into opening an immediate investigation into the incident.

He called on UN High Commissioner for Human Rights Michelle Bachelet to implement her mandate under the Human Rights Council resolution 31/36, which demands a database of all business enterprises engaged in Israeli settlement activity in the occupied Palestinian territories, and to strive for international protection of Palestinians living under the Israeli occupation.

“The international community has not only failed to stop demolitions and forced displacement in Sur Bahir, but also failed to hold Israel accountable for its continued violations of international law. Israel's actions are not only serious violations of the Fourth Geneva Convention, but are war crimes pursuant to the Rome Statute of the ICC. Therefore, we call for the urgent cessation of crimes being committed in the occupied State of Palestine,” Erekat said.

The remarks came a day after hundreds of Israeli troops with bulldozers tore down homes in Sur Bahir despite local protests and international criticism.