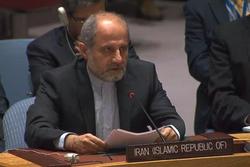 Iranian Ambassador and Deputy Permanent Representative to the United Nations (UN) Eshaq Al-e Habib blasted the US for taking side with Israel against the Palestinians, and said that the Tel Aviv regime should end its occupation to pave the way for resolving the crisis of the Palestinian people.

RNA - “The unlawful occupation of Palestine is the main source of this crisis and it can end only by ending the occupation,” Al-e Habib said, addressing the UN Security Council meeting on the Situation in the Middle East.

The Iranian ambassador, meantime, pointed to the initiative proposed by US President Donald Trump, dubbed as the "Deal of the Century", and said, “The so-called deal of the century is based on wrong assumptions simply because it is to buy the Palestinian cause and aspirations, honor and dignity, property and territory, and inalienable rights of an entire nation.”

He underlined that Trump’s initiative is based on ill-intents, wrong assumptions and unrealistic approaches, and therefore is definitely doomed to fail.

“It is based on ill intent simply because it has been proposed by the US, a country who is well-known for its biased policies rendering unconditional support for Israel as well as unjust practices towards the Palestinians,” Al-e Habib added.

In relevant remarks in late May, Secretary of Iran's Supreme National Security Council (SNSC) Ali Shamkhani, in a video address to a conference in the Gaza Strip under the title of “No to Deal of Century”, reassured that the Palestinian nation will defeat the US-devised plot, dubbed “the deal of the century,” through resistance.

“The deal of century will be defeated at the hands of the resisting people of Palestine,” Shamkhani added.

The United States has kept the plan, which it says is aimed at the Israeli-Palestinian conflict, under wraps. Leaked information, however, indicate that it features serious violations of the Palestinian’s age-old demands.

Shamkhani said the plan aims at “complete elimination of Palestine,” speaking via video link at the event, which was held in Gaza City in the coastal enclave with senior leaders of Palestinian resistance groups in attendance.

Using the scheme, Washington is trying to abuse the “ignorance, laxity, and the treacherous nature” of some of its vassal states to “permanently do away with the issues of the Palestinian refugees’ return [to their homeland] and formation of an independent Palestinian state,” he added.

The conference came in the run-up to International Quds Day.

The day was so named, Shamkhani said, as a token of support for anti-Israeli resistance until the ultimate liberation of the entirety of the occupied Palestinian territories.

The Iranian official then highlighted how the victory of Iran’s Islamic Revolution in 1979 was followed by creation of resistance movements that defeated Israel in all their confrontations with the regime, liberating Gaza and southern Lebanon. He saluted the resistance fighters, who brought about the victories.

Further in the conference, the leader of Hamas Movement in the Gaza Strip, Yehya al-Sinwar, said the US-devised "deal of the century" will not go ahead.

He also asserted that the Palestinian resistance front will not abandon the Palestinian cause, including liberation of all Israel-occupied territories, most notably the holy city of Jerusalem al-Quds.

“We will not sell al-Quds …We believe liberation of al-Quds will come soon,” he noted.

The Hamas leader urged all Muslims to participate in International Quds Day rallies on Friday, and thanked the Islamic Republic for its support for Palestinians in the face of Israeli aggression.

The resistance outfits, Sinwar said, are undaunted by Israeli threats and military equipment, noting how Palestinians had managed to develop missiles domestically.

According to Fars News Agancy, Leader of Palestinian Islamic Jihad, Ziyad Al-Nakhaleh, also addressed the conference, warning the Israeli regime against resorting to renewed military aggression against the enclave.

He said the resistance will be targeting Tel Aviv if the regime attacks the Gaza Strip, adding, “We will target Israel with more missiles if a new war erupts.”

“In every battle, we will impose a new equation on enemy,” Nakhaleh stated.

He asserted Palestinians’ rejection of all US plots targeting the Palestinian cause, adding that Palestinians are all united in the cause of thwarting American conspiracies.

Leader of Palestinian Islamic Jihad also welcomed the stance of Mahmoud Abbas, the head of the Palestinian Authority, against “the deal of the century,” and denounced an upcoming US-sponsored event in Bahrain aimed at promoting the economic aspects of the plot. ‎

IRGC Monitoring All US Moves in Persian Gulf