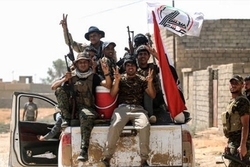 Iraqi military forces have launched the second phase of a major operation to hunt down the remnants of the Daesh Takfiri terrorist group north of the capital Baghdad and surrounding areas.

RNA - “Under the guidance of the Commander-In-Chief of Iraqi forces (Prime Minister Adel Abdul-Mahdi), supervision of the Joint Operations Command (JOC), and following successful realization of goals defined in the first phase of the Will of Victory Operation, the second phase was launched at dawn on Saturday,” the second-in-command of the JOC, Lieutenant General Abdul Amir Rasheed Yarallah, said in a in a statement.

The statement added that the second phase aims to “to beef up security and stability in areas north of Baghdad and surrounding areas in the provinces of Diyala, Salahuddin and Anbar.”

It said that units from the Baghdad Operations Command, command operations from Diyala, Samarra and Anbar, the Federal Police Command, rapid response teams, voluntary Hashd al-Sha’abi fighters and the special forces regiment of the Operations Department of the Chief of Staff of the Army as well as the Special Task Force of the Directorate of Military Intelligence are participating in the offensive.

The statement further noted that the offensive is supported by fighter jets from the Iraqi Air Force and the US-led coalition purportedly fighting Daesh.

Iraq's army and the voluntary forces began the first phase of the Will of Victory Operation early on July 7, the military said in a statement, adding that the operation would last several days and was aimed at securing the province of Anbar and the central and northern regions of Salahuddin and Nineveh.

“We press on the hands of our heroic forces that will achieve victory with the will of its heroes against the gangs of Daesh,” Abdul-Mahdi said.

“May God protect you and make you victorious,” he added.

Former Iraqi prime minister Haider al-Abadi declared the end of military operations against Daesh in the country on December 9, 2017.

King Salman OK's deployment of 500 US troops in Saudi Arabia