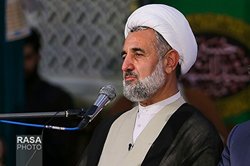 The head of the National Security Commission said that if the European partners to the ‎JCPOA doesn’t fulfill its commitments to the JCPOA within the sixty-day timeframe, Iran will ‎take the third step with power.‎

RNA – Speaking with on the radio program “Discussion of the Day” on the topic of “Iran’s ‎Reduced Commitment to the JPCOA,” Hujjat al-Islam Mojtaba Zonnour, the chairman of the ‎National Security and Foreign Policy Committee of the Islamic Consultative Assembly, ‎said, “If Europe doesn’t fulfill their obligations within the sixty-day period in which we are in, ‎then Iran will take the third step with power.” ‎

Referring to the role of “good and bad police” being played between the European Union, ‎together with Germany, France, and the United Kingdom (known as the E3) and the United ‎States, he said, “Europe and the United States have no substantive differences in dealing ‎with the Islamic Republic of Iran but only their methods are different.”‎
‎ ‎
He added, “The United States has always sought to overthrow the Islamic Republic of Iran ‎but because it hasn’t succeeded in achieving this goal, it seeks to exert pressure on the ‎people of Iran.” ‎

Hujjat al-Islam Zonnour‎ said that regard to the adventure of the JCPOA, Europeans only ‎want Iran to pay the cost and not benefit from the JCPOA. ‎

Referring to the implementation of the “second step of reducing Iran’s commitments to the ‎JPCOA,” the representative of the people of Qom in the Islamic Consultative Assembly ‎‎added, “This step involves an increase in the level of uranium enrichment to 3.67% and the ‎restoration of the heavy water reactor in Arak.” ‎

He said that submarines are considered to be an important military strategic weapon in ‎which nuclear propulsion is used. These propellants are powered by nuclear energy and ‎require sixty percent fuel. For this reason, the second step can provide the opportunity to ‎supply the fuel for this nuclear propellant if necessary.”‎
‎ ‎
Hujjat al-Islam Zonnour described the actions of the Europeans in regard to the JCPOA as ‎someone who received money from the customer but didn’t give him the goods and added, ‎‎“Now, Europe wants Iran to be self-reliant, while they haven’t fulfilled any of their ‎obligations. After one year, we have come to the conclusion that we will do our part and will ‎not wait for them.”‎

He said that the JCPOA was a matter of concern for Europe and added, “Nevertheless, ‎Europe wants to pull the breaks on the Islamic Republic of Iran through the JPCOA without ‎paying the price.”‎

Hujjat al-Islam Zonnour ‎noted the determination of the Islamic Republic of Iran in reviving its ‎rights and added “If Iran doesn’t fulfill its obligations within the sixty-day period in which we ‎are set, Iran will take the third step with power and this stage could include installing new ‎centrifuges and increasing the number of active centrifuges.”‎