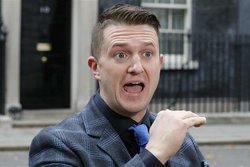 A British anti-Muslim activist has launched a public appeal for US President Donald Trump to grant him political asylum as he faces imprisonment after being convicted in a contempt of court case.

RNA - Tommy Robinson, the co-founder of the English Defense League (EDL) which is a far-right Islamophobic organization in the UK, was found to have committed contempt of court last week after he filmed defendants on trial and broadcast it on social media in breach of a reporting ban.

The UK high court said Robinson, whose real name is Stephen Yaxley-Lennon, was attempting to agitate the public and was clearly interfering with the administration of justice.

“His words had a clear tendency to encourage unlawful physical or verbal aggression towards identifiable targets. Harassment of the kind he was describing could not be justified,” said high court judge Dame Victoria Sharp.

“There was plainly a real risk that the defendants awaiting jury verdicts would see themselves as at risk, feel intimidated, and that this would have a significant adverse impact on their ability to participate in the closing stages of the trial,” she said.

Robinson, facing up to two years in jail for breaching reporting restrictions, is due to be sentenced on Thursday.

After being informed of the conviction and ahead of his sentencing hearing, Robinson appeared on US-based InfoWars conspiracy theory channel and personally “begged” Trump for seeking asylum in the United States.

"I feel like I’m two days away from being sentenced to death in the UK for journalism," the EDL co-founder said. "Today, I am calling on the help of Donald Trump, his administration and the Republican Party to grant me and my family political asylum in the United States of America."

"I beg Donald Trump, I beg the American government, to look at my case. I need evacuation from this country because dark forces are at work," he added. “This is a direct appeal on behalf of my family – we love the United States, I have no future here [in Britain], the country has fallen.”

The 36-year-old far-right activist later claimed British prisons were "controlled by jihadi gangs" and that he would be killed if he ended up in jail.

Robinson has repeatedly sparked controversy over his conduct.

Facebook banned the far-right activist from its platforms in February over anti-Muslim content the company said “has repeatedly broken” anti-hate speech standards.

Many social media users picked up on Robinson's hypocrisy and his intention to seek asylum in the US for breaking English laws.