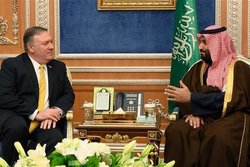 US Secretary of State Mike Pompeo says he is visiting Saudi Arabia and UAE after Iran shot down a US drone violating its airspace, stating that he is seeking a “global coalition” against Tehran.

RNA - "I'm heading out today. Our first stops will be in the kingdom of Saudi Arabia and the United Arab Emirates, two great allies in the challenge that Iran presents and will be talking with them about how to make sure that we are all strategically aligned and how we can go about a global coalition," he told reporters Sunday

Secretary of State Mike Pompeo: "I'm heading out today. Our first stops will be in the Kingdom of Saudi Arabia and the United Arab Emirates, two great allies in the challenge that Iran presents." pic.twitter.com/Uecdt5C60i

Tehran has time and again asserted that it does not seek war with the US, yet stands ready to defend its interests in the region.

Pompeo further asserted before boarding his plane that the US is ready to for negotiations with Iran “with no preconditions.

Despite repeating threats and baseless accusations against Tehran, Washington has also been calling for negotiations.

In an interview with NBC aired Sunday, US President Donald Trump also made the same comment.

“I'm not looking for war and if there is, it'll be obliteration like you've never seen before. But I'm not looking to do that. But you can't have a nuclear weapon,” Trump said.

The latest comments came just over a week after Japan’s Prime Minister Shinzo Abe met with Leader of the Islamic Revolution Ayatollah Seyyed Ali Khamenei in Iran, publicly revealing that he carried a message from Trump for renewed talks between Washington and Tehran.

The Iranian Leader, however, snubbed the offer insisting that he considers Trump “unworthy of exchanging messages with,” and adding: “I do not have and will not have any response for him.”