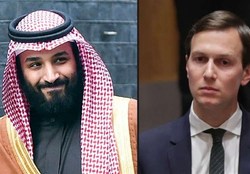 Representatives from both the Palestine Liberation Organization (PLO) and Hamas rejected senior White House advisor - and US President Donald Trump’s son-in-law - Jared Kushner’s peace plan, even though only the economic part of the plan was revealed Saturday.

RNA - Hanan Ashrawi, a member of PLO executive council and a negotiator, said economic measures will not solve the Palestinian-Israeli conflict, adding that only a political solution will work, Sputnik reported.

“If they really care about the Palestinian economy they should start by lifting the siege of Gaza, stopping Israel stealing our money and our resources and our land and opening up our territorial waters, our air space and our borders so we can freely export and import,” Ashrawi stated.

Ashrawi called for the US to exert pressure on Israel to end Tel Aviv’s “occupation” of Palestinian territories, observing that the Trump team embarked on an “entirely wrong approach”.

“They can end the occupation, which is the most basic requirement for prosperity. There can be no prosperity under occupation,” she noted.

Comments from Hamas representative Ismail Rudwan were more blunt. Rudwan asserted that Hamas rejects Kushner’s plan in its entirety and will only accept if Israel, which Hamas considers an occupant, leaves Palestinian territories.

“We reject the ‘Deal of the Century’ and all its dimensions, the economic, the political and the security dimensions,” Rudwan said, adding, “The issue of our Palestinian people is a nationalistic issue; it is the issue of a people who are seeking to be free from occupation. Palestine isn’t for sale, and it is not an issue for bargaining. Palestine is a sacred land and there is no option for the occupation except to leave.”

“What’s been published until now looks good and even very good. We are always in favour of developing the Palestinian economy, ending the humanitarian crisis in Gaza, ensuring economic prosperity in the Palestinian communities,” Steinitz stated in an interview to Israel’s Reshet TV.

On Saturday, Kushner unveiled the economic part of Washington’s peace plan for the Middle East, which his father-in-law dubbed the “Deal of the Century”. The plan involves a $50 billion investment into Palestinian territories and neighbouring Arab state economies to upgrade infrastructure, enhance tourism and develop an online electronic governmental system, among other goals.

The economic part of the plan was presented by Kushner during an exclusive interview with Reuters Television. The remaining part of the plan will be unveiled during a “workshop” in Bahrain’s capital city of Manama on 25-26 June.

Palestinian officials opted out of attending the workshop. In the absence of Palestinian leaders, Washington refrained from inviting Israeli officials.