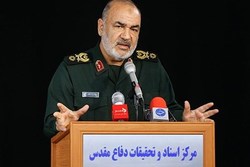 Commander of the Islamic Revolution Guards Corps (IRGC) Major General Hossein Salami underlined that the country's ballistic missiles play as a deterrence to enemy threats and have changed the equations.

RNA - The Islamic Republic acquired the knowhow 12 years ago while trying to prepare its defenses against the United States’ aircraft carriers, General Salami said, addressing students and professors at Amirkabir University of Technology in Tehran on Tuesday.

“This had to be done using ballistic missiles since cruise missiles were vulnerable due to their speed and their trajectory being close to the ground,” he added.

“Ballistic missiles, however, hit their target at a speed, which is several times the speed of sound, and are difficult to be targeted with anti-missile missiles.”

Elsewhere, General Salami referred to the US sanctions and pressures against Iran, and said, “The pressure, which you are witnessing (being exerted) is the maximum, which the enemy can apply.”

“They have weakened,” he said, adding, “Our enemy is being struck hollow (from within) and America’s era is ending.”

In relevant remarks late last month, General Salami reviewed the technological advancements of Iran’s defense industry in the face of possible US scenarios against Tehran, reassuring that his country had successfully exhausted all enemies’ capacity for various types of warfare.

“A guidance and control system capable of steering a ballistic missile to hit a mobile target is a miracle of technology which is possessed by maybe one or two countries (in the world),” Major General Salami said.

“Twelve years ago it happened,” he added, reminding that Iran test-fired a ballistic missile in 2007 which hit a target three times smaller than a US aircraft carrier on the sea. “The aircraft carriers’ scenario is over for us,” reiterated the commander, reassuring that his country is capable of drowning hostile vessels in the Persian Gulf and the Arabian Sea.

According to Fars News Agancy, He added that the country’s enemies had unsuccessfully exhausted all of their capacity for various types of warfare against the Islamic Republic.

Salami said Iran’s enemies had already attempted maximum pressure against Iran in every area — including economic, cultural, and political ones — to no effect.